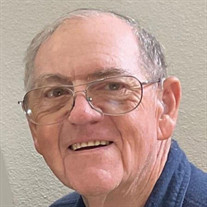 A. Wayne Andersen, age 73, of Elkhorn, formerly Kearney, passed away Thursday, January 27, 2022 in Gretna. Funeral services will be on Friday, February 4th at 10:30 a.m. at Horner Lieske McBride & Kuhl Funeral Home in Kearney. Pastor Matt Fowler will officiate followed by burial at Kearney Cemetery. Visitation will be an hour prior to services. Memorials are suggested to the family. Please visit www.hlmkfuneral.com to leave a tribute or message of condolence. Wayne was born to Dewey and Thelma (Hesseltine) Carpenter on August 28, 1948 in Kearney, NE. At the age of 7 he was adopted by Robert and Violet (Carpenter) Andersen. He grew up in the Gibbon area, graduating from Gibbon High School in 1966. Wayne married Betty Schroeder on January 28, 1971. Wayne and Betty made their home in Kearney where Wayne was employed at the Eaton Corporation for 39 years. Wayne retired from Eaton in 2008 and the couple moved to Elkhorn in 2010. They attended First United Methodist Church in Kearney. Survivors include wife, Betty of Elkhorn; daughter, Heather (Craig) Swanson of Elkhorn; son, Jeffrey (Mary) Andersen of Gretna; grandchildren, Brittany, Brenden, Riley, Kaleb Andersen and Esher Swanson; parents, Robert and Violet Andersen of Gibbon; sisters, Tammy Moore of Lincoln, Kathy (Bill) Winshaw of Kearney and Sandi (Nick) Baltazar of Evans Colorado. Wayne was preceded in death by his parents Dewey and Thelma Carpenter; son, Heath Andersen; sisters, Joyce Vollmer and Linda Burton; brother, Dennis Peterson and his beloved dog, Freckles.

The family of A. Wayne Andersen created this Life Tributes page to make it easy to share your memories.

Send flowers to the Andersen family.