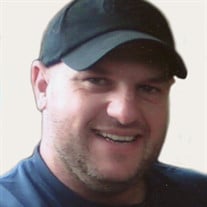 Aaron L. Lawson, age 46, of Kearney, passed away Saturday, August 1, 2020 at his home. Private family memorial services will be at a later date. Visitation with family will be on Thursday, August 6, 2020 from 5:00 p.m. – 7:00 p.m. at Horner Lieske McBride & Kuhl Funeral and Cremation Services in Kearney. Cremation will follow visitation. Memorials are suggested to the family, to be designated later. Please visit www.hlmkfuneral.com to leave a tribute or message of condolence. Horner Lieske McBride and Kuhl Funeral and Cremation Services are in charge of arrangements. Aaron was born on August 9, 1973 to Roy Lawson Sr. and Sandy Harker Reese in Kearney, NE. He spent some time in Ord, NE but lived the majority of his life in the Kearney area. Aaron married Julie Graham Hendrickson on May 26, 2010 in Kearney. Julie had three children from a previous marriage that Aaron immediately welcomed as family. He attended elementary and high school in Kearney. Aaron enjoyed fishing, hunting and spending time with his family, especially his grandchildren. He was a great cook and loved to grill for any occasion. As a child, he would often tinker with small appliances and bicycles. He loved his Hot Wheels collection and was a gifted mechanic. Surviving relatives include his wife, Julie Lawson of Kearney; 3 stepchildren, Natasha Graham, Nicole Hendrickson and Steven Estelle all of Kearney; parents, Roy Lawson, Sr. and Sandy Reese both of Kearney; brother, Roy Lawson, Jr. of Kearney and sister, Jackie Lawson of Kearney; many other nieces, nephews, and other extended family and friends. Aaron was preceded in death by his maternal and paternal grandparents.

The family of Aaron L. Lawson created this Life Tributes page to make it easy to share your memories.

Send flowers to the Lawson family.