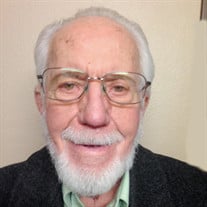 Addason Eber Richards, age 90, of Elm Creek, passed away Thursday, November 19, 2020 at his home. Funeral services will be 1:00 p.m., Tuesday, November 24, 2020 at the Kearney Seventh-Day Adventist Church with Pastor Greg Bullion officiating. Visitation will be an hour before the service at the church. Burial will follow at the Elm Creek Cemetery. Memorials are suggested to the family to be designated later. Addason was born February 17, 1930 in Elm Creek, Nebraska to Roy Arthur & Elizabeth Richards, the fifth of six children. His other siblings being all girls, he was given the name “Add-a-son” by his father. After his graduation from Platte Valley Academy in Shelton, NE, Addason left the farm at 17 and attended Southwestern Adventist College in Keene, TX. While working as a roofer in Ft. Worth one winter, he saw the electricians “had it made” and so gradually found his path to Houston’s Brown & Root as an electrician, later passing the Master Electrician test. After a few years, he left Brown & Root and started his own residential contractor company. Later he returned to Brown & Root where he was hired as an Electrical Superintendent, a job which required frequent relocation for him and his family, and the acquisition of several different state electrical licenses. He gained experience in refineries, chemical, conventional, and nuclear power, paper and paper products, as well as residential and commercial. He retired from Brown & Root with 30+ years. His work nickname was “A.E.,” to which he once said meant, “Always Early,” to a co-worker who often asked for over-time. He married Beverly June Ann in January of 1998. In 1999, he and Beverly started building their beautiful Elm Creek home and barn on the homestead property. He and Bev did much of the electrical and carpentry work themselves. He loved buying calves, and made a special mix of grain, powered milk etc. so his calves would fatten up faster. He always got a good price on his cows, because the local people knew he didn’t feed them chemicals or enhancements. His son teased his herd were “Adventist cows” and that he “left the farm at a young age and worked hard all his life so he could return to the farm. He had a very loving, gentle, and kind spirit. He was known as the peacemaker of the family. He loved the Lord and served Him faithfully! He is survived by his wife Beverly; his son Ernest Richards and daughter Janet Davidson, and Beverly’s sons Tom Thomas, Timothy Thomas and James Thomas; fourteen grandchildren, and over thirty great-grandchildren.

The family of Addason E. Richards created this Life Tributes page to make it easy to share your memories.

Send flowers to the Richards family.