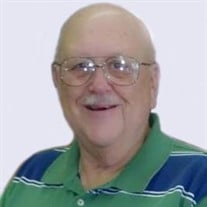 Alan P. Brecht, 74, of Kearney joined his heavenly family on Wednesday, January 8, 2020 at St. Luke’s – Good Samaritan Society in Kearney. Funeral services will be Monday, January 13, 2020 at 1:00 p.m. at First United Methodist Church in Kearney. Rev. Melody Adams will officiate and burial will be at Prairie Center Cemetery at Havens Chapel. Visitation is planned Sunday, January 12, 2020 from 4:00 p.m. – 6:00 p.m. at Horner Lieske McBride & Kuhl Funeral and Cremation Services in Kearney. Memorials in lieu of flowers are suggested to St. Jude’s Children’s Hospital or the Teammates Program. Attendees are encouraged to wear red to the funeral and visitation as one of Alan’s last wishes as an avid Husker fan was to be surrounded by a Sea of Red. Please visit www.hlmkfuneral.com to leave a tribute or message of Condolence. Horner Lieske McBride & Kuhl Funeral and Cremations Services are in charge of arrangements. Alan was born on August 2, 1945 in rural Culbertson, NE to Jacob and Pauline (Hoff) Brecht. He attended school in Culbertson and graduated in 1963. He then attended Kearney State College and graduated with a teaching degree in math and english in 1967. He was honored to be a student manager for the Kearney State College Football Team under Al Zikmund while at Kearney State. Alan taught school in Axtell for 7 years and would later start a career in tv and radio sales and broadcasting that would span over 50 years. On December 1, 1979 Alan married Karen V. Gewecke in Kearney. They lived in Kearney, Lincoln and Grand Island while he worked at various radio stations in advertising sales and live broadcasting including 30 years as a co-host on the Breakfast Flakes morning show on KGFW radio in Kearney. Alan and Karen owned a number of business over the years including the Regency and Sugar Bee Bakeries and currently Funtastic, Inc. fun center in Kearney. Alan enjoyed gardening, watching Nebraska Football and Westerns on TV, 60’s and 70’s music and also traveling to Branson, MO. He especially adored his grandchildren as they were his pride and joy. He and Karen were a host family to UNK International Students for a number of years. Alan was also proud to be a mentor in the Teammates Program. He was a member of the Kearney First United Methodist Church, Kearney Community Band, Kearney Community Theater and also a former Kearney High Bearcat Band Parents president where he helped sponsor 3 band trips. Surviving relatives include his wife, Karen of Kearney; sons, Kyle Brecht and Crystal Rundell of Gibbon and Nathan and Rebecca Brecht of Kearney; grandchildren, Caley Brecht of Fort Pierce, FL, McKenna, Daykin, Alynn and Vada Brecht of Kearney; sisters, Norma Wilson of McCook, NE and Lila and Ron Cook of Culbertson, NE; many nieces, nephews, cousins, other extended family and friends. Alan was preceded in death by his parents; beloved son, Matthew; brother, Ken and his wife Carol; brother in law, Virgil Wilson

The family of Alan P. Brecht created this Life Tributes page to make it easy to share your memories.

Alan P. Brecht, 74, of Kearney joined his heavenly family on...

Send flowers to the Brecht family.