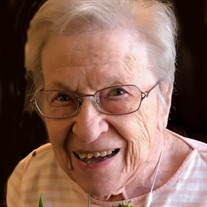 Alliene Ann Appelhans (Alliene Ann Smith-Wright), age 98, passed peacefully at the Emerald Nursing Home in Cozad, NE. on March 29, 2021. A Celebration of Life will be 10:00 a.m., Tuesday, June 29, 2021 at Horner Lieske McBride and Kuhl Funeral Home with Pastor Melody Adams officiating. Inurnment will follow the service at 3:00 p.m., at Fort McPherson National Cemetery with AsceraCare Hospice Chaplain Steven Shanno officiating. In lieu of flowers memorials are suggested to the Childhood Brain Tumor Foundation, Amedisys Hospice, First United Methodist Church or the Alzheimer's Foundation. Horner Lieske McBride & Kuhl Funeral and Cremation Services in Kearney is in charge of arrangements. Alliene was born on March 16, 1923 and raised the second eldest of 9 children on a farm near Oshkosh, NE. She attended grade school at a nearby country school and graduated from Chappell High School in 1940, often boarding in Chappell during the week and returning to the farm on weekends. After high school, Alliene attended secretarial school in Denver before marrying Max Wright. Soon after their son Michael was born, Max joined the Air Force as a fighter pilot and served his first tour in Europe. After a brief reassignment in the States, he was reassigned to the South Pacific where he lost his life. Their daughter Linda was born three months later. Alliene was employed as a civil servant at the Sioux Ordinance Depot near Sidney, NE, where she met and married Jacob (Luke) Appelhans. Also, a veteran of WWII, he served in the Army stationed in North Africa. They spent 20 years raising their family at the Sioux Army Depot. After the children graduated from Sidney High School and left home, Luke and Alliene moved to various military bases in the United States and Germany. They enjoyed traveling throughout the states and Europe, retiring to a country property near Roseburg, Oregon, where they lived happily near several brothers and sisters and their families. Too soon, Luke was diagnosed with Alzheimer’s and they made their way to Kearney to be near Linda’s family. After his passing, Alliene lived independently in Kearney, enjoying family, neighbors and friendships through Bible studies, needlepoint, and a book club. She was never without a book near at hand for as long as her family can remember. Her family was her pride and joy, always ready for anything they suggested...travel, family meals, shopping, lunch dates, and many holiday celebrations. When her memory and body began to fail, she moved to assisted living. A bad fall, a hospital stay, COVID restrictions and a nursing home stay determined her life in 2020, all the while never losing her positive attitude and kind, gentle spirit. Even after surviving a COVID infection, she gave a good fight until the end. Alliene is survived by her two youngest siblings, Sydney Jo Smith of Hillsboro, OR, and Brenda K. Schertz of Bettendorf, IA; son Michael J. (Pat) Wright, and their daughters Jenny Jo (Brad) Thiem, and Stacy (Mark) Desrocher, all of Austin, TX; her daughter Linda Max (Richard) Harr and their daughters Ann Marie (Michael) Park, all of Kearney; Rebecca Linn (Alex) Watson, of Verrierdale, Australia; and Katherine Dean Stanley, of Laguna Niguel, CA. Also, surviving her are great-granddaughters Madie Eskew, Paige Desrocher, Amelia Stanley, and step-grandchildren Elizabeth (Phillip) Pendergrass and Katharine Park of Lincoln; Saxon and Milani Watson of Australia, and many nieces and nephews. Preceded in death were her parents, Ben and Alta Smith, three brothers, three sisters, husbands Max J. Wright and Jacob J. Appelhans, and great grand-daughter Amanda Eskew.

The family of Alliene A. Appelhans created this Life Tributes page to make it easy to share your memories.

Send flowers to the Appelhans family.