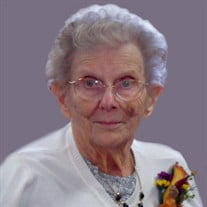 Alma J. Wotherspoon, age 98, of Kearney, passed away Wednesday, November 4, 2020 at Good Samaritan Society – St. John’s in Kearney. Private family services and burial will be held at Forrest Lawn Cemetery in Omaha, Nebraska at a later date. Memorials are suggested to St. John’s in Kearney. Alma was born November 19, 1921 in Moorehead, Iowa to Chester and Irene (Currie) Bailey. She grew up in Omaha and graduated from Omaha South High School. Alma attended Omaha University, where she met her future husband Allen Wotherspoon. They were married on December 2, 1943 in Tucson, Arizona. She was a loving wife, and devoted mother, grandmother, and friend. She generously volunteered her time and talents to Jobs Daughters, Demolay, P.E.O., Eastern Star, D.A.R., and Nebraska Methodist Hospital. Alma had been an active member of her church in Omaha and Green Valley, Arizona. Alma is survived by her daughter, Linda and Kent Schroeder of Kearney, NE; sons, Wayne Wotherspoon and Laurie Roush of Omaha, NE, Keith and Linda Wotherspoon of Stafford, VA; sister, Barbara and Clair Soseman of Omaha, NE; 7 grandchildren, 17 great grandchildren, and 2 great great grandchildren. Alma was preceded in death by her husband, three sisters and their spouses, one granddaughter, and one daughter-in-law.

The family of Alma J. Wotherspoon created this Life Tributes page to make it easy to share your memories.

Send flowers to the Wotherspoon family.