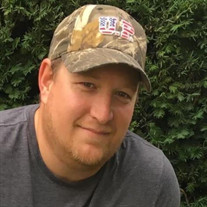 A husband, father, son, brother, friend, soldier, mentor, and an all-around amazing person- taken too soon. Andrew Frerichs' life journey was unexpectedly cut short at the young age of 44. He was so bravely fighting cancer but passed due to unforeseen circumstances on April 15, 2022. Funeral services will be 10:30 a.m., Friday, April 22, 2022 at Horner Lieske McBride & Kuhl Funeral Home with Pastor Ken Hutson officiating. Visitation will be 5:00 p.m. to 7:00 p.m., Thursday, April 21, 2022 at Horner Lieske McBride & Kuhl Funeral Home. Memorials are suggested to the family to be designated later. Please visit www.hlmkfuneral.com to leave a tribute or message of condolence. Horner Lieske McBride & Kuhl Funeral and Cremation Services in Kearney are in charge of arrangements. Andrew was so loved by his family. He left behind his wife, Ayla, and four wonderful children, Ethen, Trevor, Vivian, and Aurora. Andrew was born to Alvin and Cindy Frerichs, on May 25, 1977, in Minden, Nebraska. His father, Alvin's, life was also ended too short at the age of 58. Andy always enjoyed telling everyone how big of a family he came from. Andrew has three brothers, Jacob, John, and Calvin. Along with five sisters, Tammy, Jamie, Emma, Jennifer, and Anna. He had a brother, Joshua, whose life was taken as an infant. Andrew graduated from the High School in Sumner, Nebraska. Andy then courageously served in the United States Airforce, for 9 years and was honorably discharged in 2005. Andrew then happily gave 14 years to Union Pacific Railroad, until his cancer diagnosis, where he strongly fought for more time with his family and friends and passed too early, due to heart failure. Anyone who spent time with Andy knew that he took pride in his wit and humor. He was always a jokester and knew how to make people laugh. Andy always had such a big heart, especially when it came to mentoring people. He really cared about the people he spent time working with throughout his lifetime. He also adored his family so much; he would do anything for them. He took great pride in his four kids and was so proud of them. His most precious time was spent cuddling with his kids. He would also say he spent precious time playing video games with his many friends he met over the years. Andrew will be missed by a sea of people and he knew this as his life came to an end. When our time comes, he will embrace us at the doors of heaven.

A husband, father, son, brother, friend, soldier, mentor, and an all-around amazing person- taken too soon. Andrew Frerichs' life journey was unexpectedly cut short at the young age of 44. He was so bravely fighting cancer but passed due to... View Obituary & Service Information

The family of Andrew A. Frerichs created this Life Tributes page to make it easy to share your memories.

Send flowers to the Frerichs family.