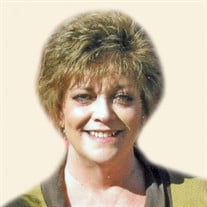 Anne L. Sullivan, 57, of Kearney, formerly of Central City, passed away at her home from complications with Lupus Thursday, January 3, 2019. Mass of Christian Burial will be 11:00 a.m., January 7, 2019 at Prince Of Peace Catholic Church with Fr. Paul Colling officiating. Visitation will be from 4:00 to 6:00 p.m., January 6, 2019 at Horner Lieske McBride & Kuhl Funeral and Cremation Services and one hour prior to the service Monday at the church. Burial will be later. Memorials are suggested to the family. Anne was born December 17, 1961 in Lexington to James and Irene (Darling) Hamik. She grew up in Kearney and graduated from Kearney High School and then graduated from Grand Island School of Business. On July 2, 1982, she married Thomas Sullivan. They had three children and made their home in Central City, until moving to Kearney. Anne enjoyed crafting, decorating, listening to music, and being with her grandchildren, who were her pride and joy. Anne was a caring and supportive mother of all children. She had a wicked sense of humor and had endearing relationships with her family, friends, and colleagues. She worked in the office of Jay Sawyer, DDS until her death and loved her work colleagues. She is survived by her husband, Thomas, of Kearney, sons, Matthew, of Madison, WI, Michael, of Lincoln, and daughter, Caitlin Vest and husband Talus of Amherst; grandchildren, Estelle, Haven, and Titus Vest; mother, Irene Hamik of Kearney; and brothers, Brad, Craig, Doug, and Eric Hamik. Anne was preceded in death by her father, James (Jim) Hamik.

Anne L. Sullivan, 57, of Kearney, formerly of Central City, passed away at her home from complications with Lupus Thursday, January 3, 2019. Mass of Christian Burial will be 11:00 a.m., January 7, 2019 at Prince Of Peace Catholic Church with... View Obituary & Service Information

The family of Anne L. Sullivan created this Life Tributes page to make it easy to share your memories.

Send flowers to the Sullivan family.