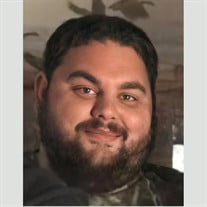 Anthony “Tony” J. Arehart, age 34, of Ravenna, passed away Sunday, January 2, 2022 at CHI Health Good Samaritan Hospital in Kearney. A celebration of life will be held later in the spring. Memorials are suggested to the family to be designated later. Please visit www.hlmkfuneral.com to leave a tribute or message of condolence. Horner Lieske McBride and Kuhl Funeral and Cremation Services in Kearney are in charge of arrangements. Tony was born on September 10, 1987 in Kearney, NE to James and Lynn (Hermann) Arehart. He attended Kearney High School and graduated with the class of 2006. Tony worked in materials and receiving at Parker Hannifin in Kearney. Tony loved to spend time with his three children. Being a father was one of his greatest joys in life. Tony loved building golf carts with his dad and teaching his children the trade as well. As an avid hunter, Tony also had a passion for building guns in his spare time. Tony was a father, a son, a brother, a cousin, a grandson, and a friend. Some of Tony’s best friends include James and Kevin O’Neil. Tony was always joking and laughing with James and Kevin. Tony had a big heart with a tough sarcastic exterior. He was always doing little favors for his friends and family. He truly loved making others happy. Surviving relatives include his parents, James and Lynn Arehart of Ravenna, NE; sister, Ashlee Arehart of Kearney, NE; children, Kolby, Kaylee, and Kaden Arehart of Wahoo, NE; Grandma, Lorraine Hermann and Grandpa, Dwayne Hill of Miller, NE; and Grandpa, Dwayne “Lee” Arehart of Kearney, NE, as well as numerous aunts, uncles, and cousins. Tony was preceded in death by his grandmother Jean Arehart.

Anthony &#8220;Tony&#8221; J. Arehart, age 34, of Ravenna, passed away Sunday, January 2, 2022 at CHI Health Good Samaritan Hospital in Kearney. A celebration of life will be held later in the spring. Memorials are suggested to the family to... View Obituary & Service Information

The family of Anthony "Tony" J. Arehart created this Life Tributes page to make it easy to share your memories.

Send flowers to the Arehart family.