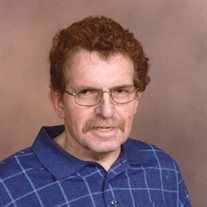 Bernard A. Kuhl, 61 of Kearney, died Tuesday, April 24, 2018 at the Lakeview Care Center in Grand Island, NE. Funeral services will be on Friday, April 27, 2018 at 10:30 a.m. at Zion Lutheran Church in Kearney. Pastor James DeLoach will officiate and burial will follow at the Kearney Cemetery. Visitation will be on Thursday, April 26, 2018 from 5:00 p.m. – 7:00 p.m. at Horner Lieske McBride & Kuhl funeral and cremation services in Kearney and also 1 hour prior to services at the church on Friday. Memorials are suggested to the family, to be designated later. Please visit www.hlmkfuneral.com to leave a tribute or message of condolence. Horner Lieske McBride & Kuhl Funeral and Cremation Services in Kearney are in charge of arrangements. Bernard was born on June 12, 1956 in Alma, NE to Jess and Wilda (Delimont) Kuhl. He attended Orleans High School and graduated in 1975. While in high school he played football and also ran on the track team. He married Denae Lynn Trampe on April 4, 1992 in Kearney. Bernard was a fan of Husker football and also UNK athletics. He enjoyed camping and the various vacations he and Denae took over the years. He was an active member of Zion Lutheran Church and served on several boards over the years. Bernard worked at Coleman Powermate, Yellow Van Cleaning, Axtell Schools, Walmart, the Viaero Event Center and most recently at CHI Health – Good Samaritan Hospital in Kearney. Bernard will always be fondly remembered by family and friends as a dedicated and hard worker. Surviving relatives include his wife, Denae of Kearney; siblings, Ralph and Carol Kuhl of Boulder, CO, Art and Gwen Kuhl of Grand Island, NE, Theresa and Dan Nelson of Orleans, NE, Sharon and Mitch Woeste of Kearney, and Janice and Darin Magnuson of Kenesaw, NE; father and mother in law, Keith and Marlene Hadwiger of Kearney; grandmother in law, Edna Geisert of Kearney; many nieces, nephews, extended family and friends. Bernard was preceded in death by his parents, Jess and Wilda Kuhl; brother, John Kuhl; grandfather in law, Eldor Geisert

The family of Bernard A. Kuhl created this Life Tributes page to make it easy to share your memories.

Send flowers to the Kuhl family.