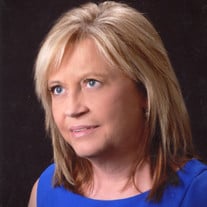 Bette Jo O’Meara, 59, of Kearney, died on Saturday, February 16, 2019 at the Kearney Regional Medical Center. Funeral services will be on Wednesday, February 20, 2019 at 10:30 a.m. at Prince of Peace Catholic Church in Kearney. Father Joe Hannappel will officiate and burial will be later. Visitation will be on Tuesday, February 19, 2019 from 5:00 p.m. – 7:00 p.m. at Horner Lieske McBride & Kuhl Funeral and Cremation Services in Kearney and also 1 hour prior to services on Wednesday morning at the church. Memorials are suggested to Live On Nebraska and Second Wind Lung Transplant Association. Please visit www.hlmkfuneral.com to leave a tribute or message of condolence. Services are under the direction of Horner Lieske McBride & Kuhl Funeral and Cremation Services in Kearney. Bette was born on February 17, 1959 in Loup City, NE to Alvie L. and Marjorie A. (Evans) Lovitt. She attended school in Mason City and Litchfield and graduated with the class of 1977. Bette then attended and earned a business administration degree from Kearney State College in 1981. She later began a career in insurance which continued until her death. She married Thomas W. “Bill” O’Meara on July 9, 1983 in Kearney. Bette was raised on a farm near Mason City where her family raised Registered Angus cattle. She was very involved in the operation, working daily with the herd. She was a member of the Hopewell Livestock 4-H Club in which she was an award winning showman and seamstress. She played softball, volleyball and basketball. Bette and her husband operated O’Meara Concrete in addition to her work as an insurance agent. She loved her daughter Bridget and enjoyed being part of her active life. In 2004, Bette received a double lung transplant from Barnes-Jewish Hospital in St. Louis, MO. She was diligent about her health and very engaged in assuring her well-being to extend her life with her beloved family. With the marriage of her daughter to Zack Volquardsen and the birth of her grandson, Oliver, her world become filled with laughter and love. Despite her extreme determination, her health continued to fail. She was passionate about the organ donor programs and a strong supporter for local and national donor support groups. In addition to being with her family and friends, her hobbies including flowers, gardening, canning, baking, reading and pets. She especially loved cats and dogs. She had an effusive personality. Surviving relatives include her husband, Bill O’Meara of Kearney; daughter, Bridget Volquardsen, her husband Zack and grandson Oliver of Kearney; two sisters, Mary (Lovitt) Sohl of Lincoln and Janis Lovitt of Kearney. Bette was preceded in death by her parents.

The family of Bette J. O'Meara created this Life Tributes page to make it easy to share your memories.

Send flowers to the O'Meara family.