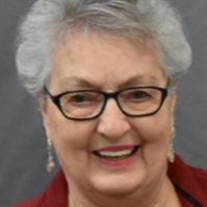 Betty June Anderson, age 81, of Kearney, passed away Saturday, November 7, 2020 at Mount Carmel Home Keens Memorial. Funeral services will be 2:00 p.m., Friday, November 13, 2020 at the First Baptist Church in Kearney with Pastor Sean Dougherty officiating. For those unable to attend, the funeral will be live streamed at kearneyfb.org. Visitation will be an hour before the funeral at the church. Burial will follow the funeral at the Kearney Cemetery. Memorials are suggested to the First Baptist Church. Betty was born September 30, 1939 in Lincoln to Jay and June (Barber) Kerwood. She was raised in Beaver Crossing and Kearney. She later moved to Lincoln with her family. In 1957 she married Jim Williams and raised her family. In 1997 she reconnected with her high school sweetheart, K’Don Anderson. They married in April of 2007 and she moved back to Kearney where she spent the rest of her time. Betty had a loved of God, family, friends, and lived her life in a way that proved that to all who crossed her path. Betty is survived by her husband, K’Don Anderson of Kearney, NE; two daughters, Kimberly (Kevin) Barnette of Saucier, MS and Kristel (Jon) Wischmann of Valparaiso, NE; son-in-law, Ferrin McNeese of Lincoln, NE; step son, David Anderson of Alma, NE; grandchildren, Kevin, Kellie, Ashley, Britny, Timothy, Asa, Tristan, and Daniel; 17 great-grandchildren; sister, Shirley (Galen) Ashcroft of Lincoln, NE; brother, Larry Kerwood of Oklahoma; and numerous nieces, nephews, cousins, and friends she loved like family. Betty was preceded in death by her parents and a daughter, Korrine McNeese.

The family of Betty J. Anderson created this Life Tributes page to make it easy to share your memories.