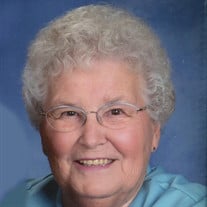 Betty Lou J. Abels, 88, of Kearney, formerly Amherst, passed away Friday, October 1, 2021, at the Central Nebraska Veterans Home in Kearney. Funeral services will be on Thursday, October 7, 2021 at 11:00 a.m. at Trinity Lutheran Church in Amherst. Pastor Quinton Cundiff will officiate and burial will be at the Stanley Cemetery near Amherst. Visitation will be on Wednesday, October 6, 2021 from 5:00 p.m. – 7:00 p.m. at Horner Lieske McBride & Kuhl Funeral Home in Kearney. Memorials are suggested to Trinity Lutheran Church. Please visit www.hlmkfuneral.com to leave a tribute or message of condolence. Horner Lieske McBride & Kuhl Funeral and Cremation Services in Kearney are in charge of arrangements. Betty Lou was born on January 11, 1933 in Bradshaw, NE to Archie E. and Minnie J. (Dodson) Eldridge. The family moved to the Miller, NE area where Betty Lou attended school through the 10th grade. The family then moved to the Amherst area where she attended Amherst High School and graduated with the class of 1950. She then attended Kearney State College for 1 year. After college, she taught rural school for 5 years near Elm Creek and Amherst. She married Marvin L. Abels on July 5, 1953 in Amherst. Betty Lou was a member of Trinity Lutheran Church in Amherst where she was involved in the Alter Guild and also taught Sunday School. She was also a member of the American Legion Auxiliary, Good Samaritan Hospital Service League and the HOP Club. Betty Lou, considered by her family as the mold from which all grandmas should come from, enthusiastically served in the role of a Mother. She was the pillar for all family gatherings and celebrations and will be fondly remembered for her ground roast beef sandwiches and rainbow jello. She enjoyed reading and also spending time with her family and extended family. She is survived by her husband, Marvin Abels of Kearney; daughters, Patricia and Victor Branstiter of Kearney; Peggy and Greg McCollough of Sheffield Lake, OH and Janet and Randy Hadwiger of Kearney; 9 grandchildren; 21 great grandchildren; sister, Lois Thomas of Kearney; sister in law, Donna Eldridge of Burdette, KS Betty Lou was preceded in death by her parents; brother, Everett Eldridge; daughter, Kimberly Jo Hinson

The family of Betty Lou J. Abels created this Life Tributes page to make it easy to share your memories.

Send flowers to the Abels family.