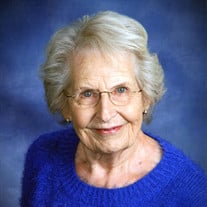 Betty M. Mills, 87, of Kearney, died Wednesday, September 19, 2018 in Omaha, NE. Funeral services will be 10:00 a.m, September 25, 2018 at Kearney E-Free Church with Pastor Adrian Boykin officiating. Burial will be at the Kearney Cemetery. Visitation will be from 5:00 to 7:00 p.m., September 24, 2018 at Horner Lieske McBride and Kuhl Funeral Chapel and one hour prior to the service at the church. Memorials are suggested to Kearney E-Free Church. Please visit www.hlmkfuneral.com to leave a message of condolence. Horner Lieske McBride & Kuhl Funeral and Cremation Services of Kearney is in charge of arrangements. Betty Marie Mills was surrounded by her children and ushered in to glory by her Savior on September 19, 2018. Betty was the youngest of four children, born to Clifford and Ruth (Lundine) Bragg in Holdrege, Nebraska on March 5, 1931. Betty grew up and attended school in Kearney and graduated with the class 1949. After graduating from school Betty worked as a bookkeeper for Montgomery Ward. She meet the love of her life Harold Mills and they were united in marriage on June 14,1953. They made their home in Kearney and were blessed with five children, Debra, Cynthia, Thomas, Kimberly, and Kristen. In their early years of marriage, they loved to spend time with their family, church and going for long walks together. After Harold’s passing in 1984 Betty went to work for Physical Optical Service until she retired in July of 2004. After retiring her days were filled with spending time with family and friends, traveling, playing bridge, attending Silver Sneakers, and her IPad was always nearby. Betty was an active member of First Christian Church where she was active in CWF, singing in the choir and serving others. Betty will be remembered as a woman of faith that showed kindness, gentleness, and thoughtfulness towards others. Betty had an unforgettable smile that warmed the hearts of those around her. She will be deeply missed by her family and friends. Betty is survived by her children, Deb Malone, Cyndi Prince, Tom (Elaine) Mills, Kimberly (Scott) Porter and Kristen (Nevin) Troelstrup. Sixteen grandchildren: Chad (Lindsay) Malone, Christopher (Stephanie) Malone, Lyndsey (Tony) Wilson, Bo Prince, Brock Prince, Trey Prince, Bret Mills, Britney Mills, Benjamin (Kara) Porter, Zachary Porter, Aaron (Ashton) Porter, Will Porter, Pressley Troelstrup, Ty Troelstrup, Samuel Troelstrup, Parker Troelstrup. Ten great-grandchildren, Kenely Malone, Schyler and Vin Malone, Finleigh and Jordy Wilson, Taytum Mills-Lutes, Mason and Nora Porter, Samuel and Ollie Porter. A brother and sister-in-law Robert and Dorothy Bragg. Betty is preceded in death by her husband, parents, and two brothers

The family of Betty M. Mills created this Life Tributes page to make it easy to share your memories.

Send flowers to the Mills family.