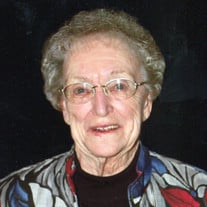 Betty L. Skiles, 87, of Kearney, died April 11, 2020 at Wel-Life Assisted Living under the care of Tabitha Hospice. Due to the current COVID-19 restrictions the family has chosen to have a celebration of life service at a later date. A private family graveside service will take place 2:00 p.m., April 15, 2020 at the Kearney Cemetery with Thayne Moore officiating. In lieu of flowers, memorials are suggested to Tabitha Hospice or Wel-Life Assisted Living in Kearney. Memorials and cards may be mailed to the family or Horner Lieske McBride & Kuhl Funeral and Cremation Services of Kearney in care of the Betty Skiles Family, 2421 Ave. a, Kearney, NE 68847. Betty was born September 12, 1922 in Mason City, Nebraska to Dallas and Bertha (Royle) Crosley. She graduated from Ansley High School. Betty married Dana “Gene” Mills of May 14, 1950 in Ansley. To this union four children, David, Sharon, Debra, and Jeanne were born. They farmed near Ansley for three years and then moved to Canada where Gene worked in the oil fields, and then the Uranium Mines in Lander, Wyoming returning to Kearney in 1964. Gene passed away on January 23, 1978. Betty worked as a bookkeeper for Redman’s Shoes in Kearney for many years until retiring in 1980. Betty married Ross Skiles in Kearney in March of 1980. They lived on his farm until he passed away in 1999. She moved into town in 1999. Betty moved into Wel-Life in 2013 and met her new extended family. She loved everyone that took care of her at Wel-Life. Betty loved being with her family, especially watching her grandchildren and great grandchildren’s sporting events. She loved Nebraska Football and the Kansas City Chiefs. Her favorite Sunday afternoon pastime was watching NFL Redzone. Betty is survived by her son, David and Rebecca Mills of Stevensville, MT; daughters, Sharon and John Beezley of Kearney, Jeanne Sweeten of Lewisville, TX; brother, Keith Crosley of Pittsburg, CA; sister-in-law, Olive and Ken Nielsen of Broken Bow, NE; 11 grandchildren and 19 great grandchildren. Betty was preceded in death by her husbands; daughter, Debbie Roper-Leal; grandson, Ryan Roper; sons-in-law, Tim Roper and Harlin “Skip” Sweeten.

Betty L. Skiles, 87, of Kearney, died April 11, 2020 at Wel-Life Assisted Living under the care of Tabitha Hospice. Due to the current COVID-19 restrictions the family has chosen to have a celebration of life service at a later date. A private... View Obituary & Service Information

The family of Betty L. Skiles created this Life Tributes page to make it easy to share your memories.

Send flowers to the Skiles family.