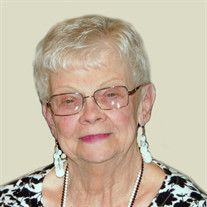 Beverly J. Duff, 92, of Frisco, TX, formerly of Kearney, passed away peacefully on Saturday, June 4, 2022 at the BeeHive Assisted Living Facility in Frisco, TX. Funeral services will be on Monday, June 13, 2022 at 1:00 p.m. at the First United Methodist Church in Kearney. Pastor Seungli You will officiate and burial will be at the Highland Cemetery near Bertrand, NE. Visitation will be 1 hour prior to services at the church on Monday. Memorials are suggested to the family, to be designated later. Please visit www.hlmkfuneral.com to leave a tribute or message of condolence. Horner Lieske McBride and Kuhl Funeral and Cremation Services in Kearney are assisting the family with local arrangements. Beverly was born to Godtfred and Hilma (Petersen) Broberg near Bertrand, Nebraska on November 20, 1929. She was blessed into Christian faith and confirmed at Westmark Church near Bertrand. She was a 1947 graduate of Bertrand High School. Beverly was united in marriage to Carrol E. Duff on February 22, 1948 at Westmark Church. Beverly and Carrol lived in Bertrand from 1948-1976. To this union two children were born, Davis Dwight and Cheryl LaVone. During this time, Beverly worked as a linotype operator at The Bertrand Herald for 10 years and later at the Bertrand Nursing Home. Beverly and Carrol moved to Holdrege in 1976. Beverly worked at the Phelps County Memorial Hospital and also at the Becton Dickinson plant in Holdrege. Beverly’s husband passed away on Sept 8th, 1978 in Holdrege. Beverly moved to Kearney in 1980 where she was employed as the head housekeeper at The Best Western Motel for 10 years. While in Kearney, Beverly was a member of First United Methodist Church and an active member of the church circle. Beverly was also an active member in a widow’s group. Beverly retired and lived in Kearney until 2005 when she moved to Texas to be closer to her daughter. Beverly was a loving wife, mother, grandmother, great grandmother and friend. She loved her family and she loved to laugh. Her laugh was one of a kind and what many people will remember about her. She will be greatly missed. She is survived by her son, Davis (Jeanette) of Denton, TX; son in law, Galen Esslinger of Little Elm, TX; Grandchildren, Crystal Martin (Craig) of Frisco, TX, Travis Esslinger (Gretchen) of Elletsville, IN, Dawn and Lynn Duff of Denton, TX; great grandchildren, Connor, Collin and Carsyn Martin, Madeline Esslinger, Roderick and Evan O’Connor. Bev is preceded in death by her parents, Godtfred and Hilma Broberg; husband, Carrol Duff; daughter Cheryl Esslinger; siblings, Lawrence Broberg, Betty Canada, Quinton Broberg, LeNore Sirago, Welton Broberg, Ruth Johnson, Doris Renken, and Dean Broberg

Beverly J. Duff, 92, of Frisco, TX, formerly of Kearney, passed away peacefully on Saturday, June 4, 2022 at the BeeHive Assisted Living Facility in Frisco, TX. Funeral services will be on Monday, June 13, 2022 at 1:00 p.m. at the First United... View Obituary & Service Information

The family of Beverly J. Duff created this Life Tributes page to make it easy to share your memories.

Send flowers to the Duff family.