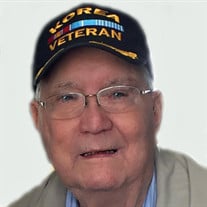 Calvin H. Owen, 88, of Doniphan and formerly Elm Creek died Friday, January 25, 2019 at Providence Place in Hastings, NE. Funeral Services will be Wednesday, January 30, 2019 at 10:30 a.m. at Horner Lieske McBride & Kuhl Funeral Home in Kearney. Rev. Dean Pofahl will officiate. Burial with military rites provided by the Elm Creek American Legion Post #316 and the Nebraska Army National Guard Military Honors Team will be at the Elm Creek Cemetery. Visitation is planned Tuesday from 5:00 – 7:00 p.m. at the Funeral Home. Memorials are suggested to the Elm Creek Fire Department or the Doniphan Senior Center. Please visit www.hlmkfuneral.com to leave a tribute or message of condolence. Horner Lieske McBride & Kuhl Funeral and Cremation Services in Kearney is in charge of arrangements. He was born May 2, 1930 in Elm Creek to Howard and Murna (Shubert) Owen. He grew up in the Riverdale area and graduated from Riverdale High School in 1948. He is a veteran of the Korean Conflict serving in the United States Army. After his service he returned to the area and married Elizabeth “Betty” Siebke on February 1, 1953. He and his wife farmed north of Kearney in the Haven’s Chapel area then moved to the Elm Creek area and farmed north of Elm Creek. They retired in 1990 and moved into the Village of Elm Creek. His wife died in 1995 and he moved to Doniphan. He was a member of the Lutheran Church, Eagles Lodge #592 in Hastings, V.F.W., American Legion and is a past member of the Elm Creek Public School Board. He enjoyed winters in Mission, TX and loved polka dancing, woodworking, hunting and fishing. Surviving relatives include daughters, Deb Thompson and husband Wendell of Hastings, NE, Connie Mitchell and husband David of Elm Creek, NE, Gwen Schroeder and husband Mick of Johnson Lake, NE and Becky Laughlin and husband Troy of Elm Creek, NE; special friend, NoElla Snow of Doniphan; grandchildren, Weston Thompson and great grandchildren Ryker and Paisley, Kara Longshore and husband Jason and great grandchildren, Avery, Skyler and Keeley, McKenzie Bertrand and husband Chris and great grandchildren Bryson and Hadley, Mickell Reil and husband Jeff and great grandchildren Mickailee, Brynlee and Kayzlee, Jared Thompson and friend Nicole, Ashley Mitchell and friend Kazuma, JoLynn Mosier and Becca Laughlin. In addition to his wife he is preceded in death by his brother, Galen in 2017.

The family of Calvin H. Owen created this Life Tributes page to make it easy to share your memories.

Send flowers to the Owen family.