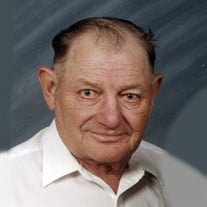 Carl H. Rasmussen, 84, of Litchfield, formerly of Pleasanton, died Thursday, May 24, 2018 at the Good Samaritan Society in Ravenna, NE. Memorial services will be on Thursday, May 31, 2018 at 10:30 a.m. at Grace Lutheran Church in Pleasanton. Rev. Dean Hanson will officiate and burial will be at Pleasanton Cemetery with military honors provided by the Leo & Clinton Krotz V.F.W. Post #9481, the Roy Eaton American Legion Post #321 and the Nebraska National Guard Funeral Honors Team. There will be no visitation. Memorials are suggested to the Pleasanton Volunteer Fire Department or to Grace Lutheran Church. Please visit www.hlmkfuneral.com to leave a message of condolence. Horner Lieske McBride & Kuhl Funeral and Cremation Services of Kearney is in charge of arrangements. Carl was born on May 1, 1934 in Howard County, NE to Axel and Petra M. (Nyker) Rasmussen. He attended high school in Litchfield and graduated with the class of 1952. Carl then served his country as a member of the United States Army. After his honorable discharge from the Army he married Janet Kegley on June 14, 1959 in Kearney. Carl worked as a farmer throughout the years and later as a drywall installer for Paul Harms Drywall. After Janet passed away in 2004 he married Lois Dittmer on April 6, 2006. Carl was a member of Grace Lutheran Church in Pleasanton. He greatly enjoyed fishing any chance he got. He also enjoyed gardening, working outdoors on his lawn, growing his own grapes for homemade wine and especially spending time with family. Carl is survived by his wife, Lois Rasmussen of Litchfield, NE; children, Kevin Rasmussen and Keith (Jane) Rasmussen all of Pleasanton, Laurie (Jeff) Otto of Arapahoe, NE and Lisa (Scott) Hopkins of Wichita, KS; brother, G.A. Rasmussen of Pleasanton; sister, Henny Larsen of Kearney; step-children, John (Kris) Dittmer of Battle Ground, IN, Paul Dittmer of Norfolk, NE and Jane Wentz of Kearney; 8 grandchildren; 5 step-grandchildren; numerous other extended family and friends. Carl was preceded in death by his parents; wife, Janet; 2 sons; 1 brother in infancy

Carl H. Rasmussen, 84, of Litchfield, formerly of Pleasanton, died Thursday, May 24, 2018 at the Good Samaritan Society in Ravenna, NE. Memorial services will be on Thursday, May 31, 2018 at 10:30 a.m. at Grace Lutheran Church in Pleasanton.... View Obituary & Service Information

The family of Carl H. Rasmussen created this Life Tributes page to make it easy to share your memories.

Send flowers to the Rasmussen family.