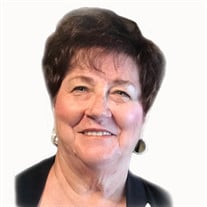 Carol S. Hubbard, 72, of Kearney, died July 13, 2018 at her home. Funeral services will be 10:30 am, July 18, 2018 at Horner Lieske McBride & Kuhl Funeral Chapel with Pastor Dean Pofahl officiating. Graveside services will be at 2:00 pm, at Gothenburg Cemetery in Gothenburg. Visitation with the family greeting friends will be from 5:00 to 7:00 pm, Tuesday at Horner Lieske McBride & Kuhl Funeral Home. Memorials are suggested to Kearney Tackles Cancer. Carol was born February 24, 1946 in Aurora, Nebraska to Thomas and Marie (Bearnth) Townsley. She graduated from Aurora High School in 1966. Carol married Glenn Hubbard on November 23, 1966 in Thornton, Colorado. They moved to Kearney in 1969. They moved to Gibbon in 1974, where Carol stayed home with the children and had an in-home daycare. Anyone who was a friend of the Hubbard kids was considered part of the family and Carol welcomed everyone into her home. Carol enjoyed being at home raising her children. When the kids were grown, she worked at Norbest in Gibbon. They returned to Kearney in 1993, where she worked at Northeast Elementary in the cafeteria. Carol never met a stranger, and enjoyed meeting her friends for coffee and a time to visit. She enjoyed spending time with her family, especially her grandchildren. She loved watching movies, playing games and was proud to be called Grandma Carol. Carol is survived by her daughter, Michelle Schaecher and husband Ken of Stillwater, OK; sons, Rod Hubbard and wife Renee of Lincoln, Calvin Hubbard and wife Jordyn of Grand Island, Brian Hubbard and wife Rita of Gibbon; grandchildren, Erika, Michael, and Claire Schaecher, Skye, Sierra, Ben, Lucy, Phoenix, and Bronx Hubbard; sister, Pat Schwenk and husband Joe of Kingman, AZ; brother, Thomas Townsley and wife Barb of Grand Island. Carol was preceded in death by her husband, Glenn; sister and brother-in-law Marg and Jerry Kuehner; and brother, Gary Townsley.

The family of Carol S. Hubbard created this Life Tributes page to make it easy to share your memories.

Send flowers to the Hubbard family.