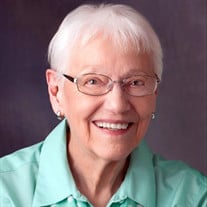 Carolee “Lee” V. Coppel, 93, of Kearney, died peacefully Monday, March 28, 2022 at Country House Residence in Kearney. A celebration of Life service will be held 11:00 am, Friday, April 22, 2022 at the Kearney eFree Church with Pastor John Fowler officiating. Inurnment will follow the service at Kearney Cemetery. Memorials are suggested to the Kearney eFree Church. Lee was born July 29, 1928 in Kearney to Carl and Lydia (Reusch) Weber. She grew up in Kearney and graduated from Kearney High School in 1946. She attended Mills College in Oakland, California, and Stanford University in Palo Alto, California before graduating with a Bachelor of Science Degree in Education from Kearney State College in 1965. Lee married Edward Coppel on January 15, 1948 in Tucumcari, New Mexico. They lived on Donner Summit near Truckee, California for several years before returning to Kearney where they farmed north of Kearney until retirement. Lee taught kindergarten for 19 years at Riverdale School. She was a member of numerous organizations including the Buffalo County Teachers Association, American Association of University Women, Alpha Delta Kappa honorary, and Good Samaritan Hospital Service League where she volunteered for many years. She was a member of the Kearney eFree Church, and active in numerous bible studies. She was a woman of deep faith, a follower of Jesus Christ and showed kindness to everyone she met. Her contagious smile could warm any heart. Lee is survived by her daughters, Carla (Jerry) Culver of Lincoln, NE, Carol Haycock of Kearney; son, Bill (Terri) Coppel of Santa Rosa, CA; brother Carl Weber of Kearney; 12 grandchildren, and 7 great grandchildren. Lee was preceded in death by her husband.

The family of Carolee "Lee" V. Coppel created this Life Tributes page to make it easy to share your memories.

Send flowers to the Coppel family.