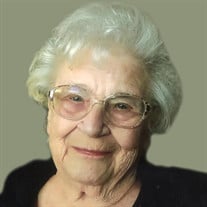 Catherine A. (Gancos) Bals, age 91, of Elm Creek, passed away peacefully Monday, March 29, 2021 at her home. Funeral services will be 11:30 a.m., April 7, 2021 at Prince of Peace Catholic Church in Kearney with Fr. Joseph Hannappel officiating. Burial will follow the service at the Catholic Cemetery in Loup City, Nebraska. Visitation will be at Prince of Peace from 6:00 to 7:00 p.m. with a wake service to follow at 7:00 p.m., April 6, 2021. Memorials are suggested to Prince of Peace Catholic Church or Kearney Catholic High School Foundation. Catherine was born February 14, 1930, along with her identical twin sister, Phyllis (Beran) Reimers, in Ashton, Nebraska to Joseph and Eva (Kalkowski) Beran. She graduated from Ashton High School in 1948 and began her teaching career the following fall at Paplin Country School northeast of Ashton. While teaching, she enrolled at Kearney State College earning her bachelor’s degree and later a master’s degree in art. Catherine taught school in Sherman County, St. James Grade School in Kearney, and Stone School in Buffalo County. In 1969 she established the Art Department at Kearney Catholic High School, where she taught until retiring in 1978. Mrs. G, as her students fondly called her, had a special bond with all of her students, especially the Kearney Catholic High School class of 1974, having taught them in Kindergarten, 1st, and 4th grades as well as high school. Catherine married Steve M. Gancos on December 27, 1952 in Loup City, Nebraska. He passed away in 1954. She later married Loren E. Bals on October 14, 1978. They lived south of Odessa. Loren passed away in 2003. As a dedicated member of the Catholic church, Catherine served in many ways throughout her life. She was a member of the Catholic Daughters of the Americas, St. James Church Choir, V.F.W. Auxiliary, Red Hat Society, and a Good Samaritan Hospital Volunteer. Sunday dinners after mass were a long-standing family tradition, with whomever could attend. It wasn’t unusual for more than 25 family members to gather in her home for the meal. She dearly loved visits from her grandchildren and great-grandchildren, sharing the best hugs. Catherine’s hobbies included growing roses, doing crossword puzzles, crafting, playing pinochle, and fishing. Special times were spent quilting with a small group of friends nicknamed “The Hens.” She was happy to discover through DNA testing in 2017 that she had an older half-sister and they met later that year. Catherine is survived by her daughters, Ann Jeanette (Gary) Gould of Elm Creek, June (Allen) Nelson of Elm Creek; stepson, Mark (Lee) Bals of Overton; stepdaughter, Laurie (Jeff) Schnacker of Elm Creek; 12 grandchildren, and 23 great-grandchildren. Catherine was preceded in death by two husbands, 4 brothers, and 3 sisters.

The family of Catherine A.(Gancos) Bals created this Life Tributes page to make it easy to share your memories.

Send flowers to the Bals family.