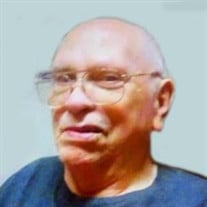 Charles Walter Marienau, age 80, of Kearney, passed away Thursday, April 7, 2022 at Mother Hull Home. Visitation will be from 5:00 p.m. to 7:00 p.m., Tuesday, April 12, 2022 at Horner Lieske McBride & Kuhl Funeral Home. Family led memorial services will be 10:30 a.m., Wednesday, April 13, 2022 at Zion Lutheran Church in Kearney. Inurnment will follow at the Kearney Cemetery. Memorials are suggested to the family to be designated later. Please visit www.hlmkfuneral.com to leave a tribute or message of condolence. Horner Lieske McBride & Kuhl Funeral and Cremation Services in Kearney is assisting the family with arrangements. Charles was born on March 25, 1942 in Kearney, Nebraska to John and Faye Marienau. He grew up and attended school in Kearney. He was united in marriage on December 2nd, 1964 to Bertha Ann Paetz, also of Kearney, where they made their home. He was employed at St. Luke’s as a cook and CHI Good Samaritan as a housekeeper. Charles was a wonderful husband, father, and grandfather. He loved spending time with his children, wife, and grandchildren before his health deteriorated. He enjoyed fishing, cooking, being outdoors, swimming, and he also taught his grandkids how to swim. He was the strongest caring man ever. He always had a good heart, always tried to take care of everyone and always had a smile on his face. He will be dearly missed by so many and forever loved by all who knew him. Those left to cherish his memory include his wife, Bertha; two children, Kenneth (Michele) and David (Angel Alferez) Marienau of Kearney; 9 grandkids; and 10 great grandkids. He was preceded in death by his parents, John and Faye Marienau; four brothers, Bob Marienau, Virgil Marienau, Wayne Marienau, Doug Marienau; and a sister-in-law Betty Loseke.

The family of Charles W. Marienau created this Life Tributes page to make it easy to share your memories.

Send flowers to the Marienau family.