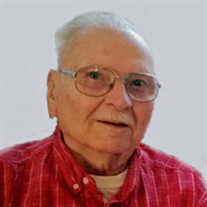 Charles (Chuck) W. Stefan passed away Thursday, May 28th, 2020 at the age of 84. Celebration of Life services will be 10:00 a.m., Wednesday, June 3, 2020 at Grace Fellowship Church in Kearney, NE. Pastor Mitch Ivey will be officiating. A memorial has been established to the family to be designated later. Charles was born in Omaha, Nebraska on December 21st, 1935, to the parents of Charles Joseph and Wilhelmina (Hejl) Stefan and was the oldest of three siblings. Charles graduated from Omaha South High School. After high school, he attended night school at the Radio Engineering Institute of Omaha for 2 years. After technical school, he moved to San Diego where he met the love of his life, Monica Deegan. Interesting fact to mention is the couple share the same birthday, but 5 years apart. Shortly after Charles was hired on at Interstate Electronics Corporation (IEC), he was transferred to Groton, CT as a field service engineer and worked on the Polaris, Poseidon and Trident Missiles on submarines as a documentation analyst. Charles and Monica were married in Ithaca, NY. On December 26, 1961, but resided in Ledyard and Oneco, CT respectfully. The couple would have been married 59 years this year. They have 4 children, Charles (Chuck), Margaret, Daniel (Dan), and David (Dave). In 1975, Charles was transferred back to the parent company in Anaheim, CA and worked there the remainder of his career. Charles enjoyed a fulfilling 40+ year career at IEC – Division of L3 Corporation from 1961-2004. After retirement, Charles, Monica, daughter Margaret and granddaughter Rachel, and son Dave, moved to Kearney, NE. Charles enjoyed family life, and such hobbies as gardening, fishing, camping, woodworking, and golfing. Of course, being born and raised in Nebraska, he was an avid Cornhusker fan, through and through, no matter what coast he lived on. Charles loved the Lord and sought a relationship to be closer to Jesus. Charles also served his country proudly in our reserve corps. He is survived by his wife, Monica; four children, Chuck (wife Leanne), Margaret, Dan (wife Jill), and Dave; six grandchildren, Charles, Tiffany (Cochran), Christian, Timothy, Tristina, and Rachel; one great-grandchild, Kamren Marie; and a sister Mary (husband Reginald) True. Charles’ brother, John Stefan, preceded him in death in 2018.

Charles (Chuck) W. Stefan passed away Thursday, May 28th, 2020 at the age of 84. Celebration of Life services will be 10:00 a.m., Wednesday, June 3, 2020 at Grace Fellowship Church in Kearney, NE. Pastor Mitch Ivey will be officiating. A... View Obituary & Service Information

The family of Charles W. Stefan created this Life Tributes page to make it easy to share your memories.

Send flowers to the Stefan family.