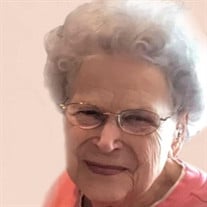 Coradell Gruwell, 93, of Kearney, died March 2, 2022 at C.H.I. Health Good Samaritan Hospital in Kearney. Funeral service will be 10:30 am, March 7, 2022 at Kearney eFree church with Pastor Adrian Boykin officiating. Burial will be at 3:00 pm the Naponee Cemetery with Pastor Scott Randall officiating. Visitation will be from 4:00 to 6:00 pm, March 6, 2022 at Horner Lieske McBride & Kuhl Funeral and Cremation Services and one hour prior to the service at the church. Memorials are suggested to the family to be designated later. Coradell was born September 13, 1928 in Kensington, Kansas to Ralph and Blanch (Conley) Norton. She graduated from Naponee High School and then earned her teaching certificate from Kearney State College. Coradell returned to school and earned her L.P.N. in 1983. Coradell married Merlin Gruwell on June 13, 1948, in Franklin, Nebraska. Coradell worked at the family business Gruwell’s Grocery and Meat Locker in Naponee for thirty years. After moving to Kearney, she worked in nursing at Bethphage Mission in Axtell and various nursing homes. She finished her nursing career as the administrator at Cambridge Court in Kearney for 18 years. Coradell was an active church member of the Weslyan Church in Naponee and the eFree church in Kearney. She enjoyed spending time with her family and following her grandchildren and great grandchildren’s activities. Coradell is survived by her daughters, Pamela and Mike Dunn of Naponee, NE, Peggy and Lynn Haussermann of Naponee, NE, Polly and Doug Sindt of Franklin, NE, Patrese and Mike O’Brien of Paris, TN; 11 grandchildren, 31 great grandchildren, and great great grandchildren, sister, Averil and Jerry Kerr of Tequesta, FL, and special family friend Mary Kalen Romjue of Rockledge, FL. Coradell Gruwell was preceded in death by her parents, husband (Merlin), 1 great granddaughter Aubree Sindt, 1 great great granddaughter Navaeh Lucht and special family friend Robert Romjue.

The family of Coradell Gruwell created this Life Tributes page to make it easy to share your memories.

Send flowers to the Gruwell family.