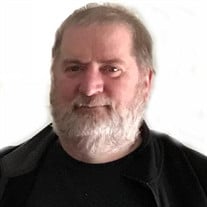 Craig Thomas Wilberding, 55, of Kearney, died on Wednesday, April 17, 2019 at his residence in Kearney. Funeral Services will be on Thursday, April 25, 2019 at 11:00 a.m. at Horner Lieske McBride & Kuhl Funeral and Cremation Services in Kearney. Father Joe Hannappel will officiate and burial will be later. There will be no visitation. In lieu of flowers, memorials are suggested to Moving Veterans Forward, which assists homeless veterans in Nebraska and Iowa. Online condolences may be submitted by visiting www.hlmkfuneral.com Arrangements are under the direction of Horner Lieske McBride & Kuhl Funeral and Cremation Services in Kearney. Craig was born in St. Joseph, Michigan on October 31, 1963. He was the third of eight children of Edward and Maureen (Murphy) Wilberding and he grew up in Norwich, Vermont. He graduated from the University of Vermont and subsequently served 6 years as an Intelligence officer in the U.S. Air Force. Later, he received a Masters of Sciences in Electrical & Mechanical Engineering from the University of Nebraska. Craig had a wonderful sense of humor with a fondness for puns and was a voracious reader. He especially loved playing board games in the Kearney area. One of his favorite games with his group of friends was Warhammer. He will be greatly missed by his family and anyone who knew him. He is survived by his father Edward of Lincoln; brothers Darrick (Marianne) of Boston, Erick (Iosella) of Rome, Italy, Douglas (Jessica) of Norwich, Vermont, Kurt (Waisum) of Brooklyn, NY; sisters Bridget Huggins (Peter) of Papillion, Mary (Günter) of Heilbronn, Germany and Tara Kim (Tom) of Newbury Park, CA; and many uncles, aunts, cousins, nieces and nephews. Craig is predeceased by his mother who passed away on March 14, 1999.

Craig Thomas Wilberding, 55, of Kearney, died on Wednesday, April 17, 2019 at his residence in Kearney. Funeral Services will be on Thursday, April 25, 2019 at 11:00 a.m. at Horner Lieske McBride & Kuhl Funeral and Cremation Services in Kearney.... View Obituary & Service Information

The family of Craig T. Wilberding created this Life Tributes page to make it easy to share your memories.

Send flowers to the Wilberding family.