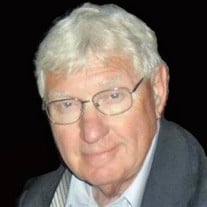 Dale A. Sickler, 84 of Papillion and formerly of Kearney died Monday, September 30, 2019 in Papillion NE. Funeral services will be Friday, October 4, 2019 at 10:30 a.m. at Faith United Methodist Church in Kearney. Rev. Jeff Wulf will officiate and burial will be at Kearney Cemetery. Visitation is planned Thursday from 5:00 to 7:00 at Horner Lieske McBride & Kuhl Funeral Home or prior to services Friday at the church. Memorials are suggested to the family to be designated later and may be sent to Marilyn Sickler c/o 8710 Weir Street Omaha NE 68127. Online condolences may be submitted by visiting www.hlmkfuneral.com. Horner Lieske McBride & Kuhl Funeral and Cremation Services in Kearney is in charge of arrangements. Dale was born January 29, 1935 in Kearney to Cyrus and Martha (Petet) Sickler. He grew up in Kearney and graduated from Kearney High School in 1953. On June 27, 1954 he married Marilyn (Jeanie) Johnson at Faith United Methodist Church in Kearney. Immediately following graduation, Dale started working for the Kearney Daily Hub. He retired in 1999 as a full-time production manager but continued to spend one day a week in the Hub plant overseeing commercial printing projects and handling budgeting and purchasing. He worked for the Hub for 52 years. He was among the team that planned the Hub’s current facility, completed in 1991. He played a key role in the transition when the Omaha World-Herald Company purchased the Hub. He was honored by the Nebraska Press Association with its Golden Pica Pole Award in 2005. He was known as “The Hub Man” He was a member of Faith United Methodist Church in Kearney, was a 4-H leader, a member of the Amherst school board, the Amherst volunteer fire department and the Kearney Elks Lodge #984 for numerous years. Dale enjoyed wood working and made many special pieces for his family. He was a great craftsman. Dale was a perfectionist in everything he did. He loved traveling in his motorhome with his family where they visited all fifty states. Dale was the strength of his family. He was a mentor and a teacher. He loved his wife, family, grandchildren and his doggies. Dale loved the great state of Nebraska. He enjoyed McDonalds coffee time with friends, sausage biscuits, ribs and sour cream raisin pie. Surviving relatives include his wife of 65 years, daughters Connie Wietjes and husband Rodney of Liberty, MO, Janeen Cox and husband Ron of Omaha; son, Steve Sickler and wife Cathy of Omaha; 9 grandchildren; 11 great grandchildren and sisters, Twila Plant and husband Richard of Royse City, TX and Lou Shields and J Walker of Mesa Az as well as many nieces, nephews and friends. He was preceded in death by parents, his daughter Kelly McNeil, two brothers and two great grandchildren.

The family of Dale A. Sickler created this Life Tributes page to make it easy to share your memories.

Dale A. Sickler, 84 of Papillion and formerly of Kearney died...

Send flowers to the Sickler family.