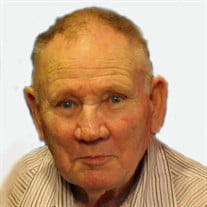 Dale L. Steinhauser, 85, of Kearney died Tuesday, April 10, 2018 at Good Samaritan Society – St. John’s in Kearney. Funeral Services have been postponed due to inclement weather to Sunday, April 15 at 9:30 a.m. at Horner Lieske McBride & Kuhl Funeral and Cremation Services in Kearney. Rev. Dean Pofahl will officiate and burial will be at Stanley Cemetery at Amherst on Monday at 9:30 a.m. Military rites will be conducted by the Nebraska Guard Military Honors Team. Visitation is planned Friday from 5:00 – 7:00 p.m. with family present, or prior to services Saturday at the Funeral Home. Memorials are suggested in lieu of flowers to the Amherst Fire Department or the Kearney Salvation Army. Online condolences may be submitted by visiting www.hlmkfuneral.com. Horner Lieske McBride & Kuhl Funeral and Cremation Services in Kearney are in charge of arrangements. Dale was born February 23, 1933 to Walter and Maude (Harmoney) Steinhauser at their farm north of Amherst. In the fall of 1937 he started school at District 31 and attended there until the winter of 1943 when he transferred to Amherst in the sixth grade. He graduated from Amherst High School in 1950. He farmed until entering the Army in 1953 and served in Korea until 1955. On November 16, 1955 he married Irene Kirschner in Pleasanton, NE. They moved to Broken Bow and lived there until the spring of 1957. They moved to Weippe, Idaho in 1957 and he worked for Potlatch Forest Industries for two years. They moved to Nezperce, ID and he worked for Bell Motors John Deere Cat. In 1961 they moved to Kearney where he worked for Buffalo County for 4 years. In 1964 he went to work for International Harvester Company then in 1966 he went to work for Baldwin manufacturing where he worked until retiring in 1996. His wife passed away in 2001 after over 45 years of marriage. Dale was a mechanic for 42 years and worked on heavy equipment most of the time. He enjoyed fishing, carpentry, trap shooting, hunting and spending time with his grandkids and great grandkids. He particularly enjoyed teaching his grandkids how to hunt, fish, and do woodworking. Surviving relatives include son, Dale “Buzz” Steinhauser and wife Chris of Kearney; daughters, Susan Rains and husband Eugene of Kearney, Kathryn Buscher and husband Cody of Columbia, MO, Sandra Spiller of Nashville, TN; grandchildren, Jared and wife Amanda Rains of Waverly, NE, Adam Rains of Kearney, NE, Lauren Buscher of New Carrollton, MD, Morgan Buscher of Columbia, MO, Sgt. Ryan Spiller and wife Ashley of Clarksville, TN, Daniel Steinhauser of Kearney, Chelsea and wife Sara Steinhauser of Howell, MI and Rachel Steinhauser of Hastings; great-grandchildren, Carson and Raygan Rains of Waverly, NE, Daxton Steinhauser of Howell, MI and Emorie and Paizlee Spiller of Clarksville, TN. In addition to his wife he is preceded in death by his sister Elda Steinhauser Ross and great-grandson, Kellen.

The family of Dale L. Steinhauser created this Life Tributes page to make it easy to share your memories.

Send flowers to the Steinhauser family.