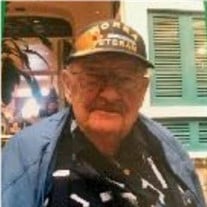 Daleard Pettijohn Former Arapahoe resident, 86 Elaine Pettijohn San Marcos, California resident, 88, formerly of Kearney KEARNEY - Memorial services for Daleard and Elaine (Swan) Pettijohn of San Marcos, California will be at 11 a.m. Friday at First United Methodist Church in Kearney. Daleard of San Marcos, Calif., formerly of Arapahoe, died Feb. 17, 2015, in Escondido, Calif., of heart-related complications. Elaine died October 20, 2017, of Pneumonia complications. -- Elaine Louise Swan was born Aug. 15, 1929, to Harold and Lillian (Volk) Swan. She graduated from Stephens College in Columbia, Mo., and received her bachelor's degree from Nebraska Wesleyan. Daleard LeRoy Pettijohn was born Feb. 24, 1928, in Arapahoe. He was a veteran of the Korean War and a graduate of the University of Denver, School of Business. Elaine and Daleard were married at First Methodist Church in Kearney, May 2, 1954. They were married for 61 years. They lived in Boulder, Colo., as well as Longmont, Colo., Lexington, Johnson Lake and in San Marcos, Calif. Elaine was a homemaker, but also helped in Daleard's real estate and auctioneering business. She was very much a 'bloom where you're planted' person, always finding a church family to support her strong faith and lifelong friends. Daleard established himself in business as real estate broker in Boulder Colo., as well as appraiser and auctioneer. He was a lifelong member of Rotary. His true hobby was travel, pursuit of the best place, best way to get there and at the best price. With relatively early retirement at age 55, Daleard and Elaine traveled by car, plane and ship. A natural storyteller, those trips were frequently where some of his best stories came from. Survivors include their children, Tami (Jerry) Jacobson of Castle Pines, Colo.; son, Todd Pettijohn of Grand Island; grandchildren, Ian Jacobson and Hannah (Stephen) Pucek of Aurora, Colo.; great-granddaughter, Adeline; and Elaine's brother, Norris Swan of Hastings. Daleard was preceded in death by his parents and extended family in Nebraska. In addition to Daleard, Elaine was preceded in death a brother and parents. Memorials are suggested in Elaine's honor to the San Diego Center for the Blind. Memorials are suggested in Daleard's honor to Rotary International Charities or the American Heart Association.

The family of Daleard L. Pettijohn created this Life Tributes page to make it easy to share your memories.

Send flowers to the Pettijohn family.