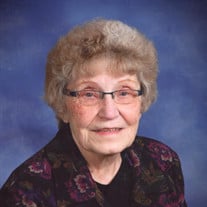 Darlene B. Lewis, age 89, of Kearney, passed away on Sunday, March 20, 2022 at Good Samaritan Society – St. John’s in Kearney. Funeral services will be on Friday, March 25, 2022 at 1:30 p.m. at First Lutheran Church in Kearney. Pastor Elisabeth Pynn Himmelman will officiate and burial will be at the Kearney Cemetery. Visitation with family present will be on Thursday, March 24, 2022 from 5:00 p.m. – 7:00 p.m. at Horner Lieske McBride & Kuhl Funeral Home and also 1 hour prior to services on Friday at the church. Memorials are suggested to the family for designation later. Please visit www.hlmkfuneral.com to leave a tribute or message of condolence. Horner Lieske McBride & Kuhl Funeral and Cremation Services in Kearney are in charge of arrangements. Darlene B. Lewis was born on May 30, 1932, in Pleasanton, NE, to William “Bill” and Bernice Hoffman. She attended school in Pleasanton, NE. Darlene married Edward “Bud” Lewis on November 24, 1950, in Kearney, NE. There were four children born to this union, Debra Lewis Happold, Darla Lewis Stromberg, Ed Lewis, and Dennis Lewis. Early in their marriage, the couple lived in Scottsbluff, NE. After a short time there, they moved back to Kearney. Kearney has been her home for 70 years. After returning to Kearney, they lived in and owned a neighborhood grocery store near Pioneer Park. After closing the grocery store, Darlene worked at the women’s clothing store Gerald’s Shop. She then began working at Redman Shoes, where she was employed for 45 years. Many people requested Darlene to fit their shoes. She fitted shoes for several generations of families. She remembered many shoe sizes up until the time of her death. After retirement, she was an ambassador at Old Towne Alchemy, her granddaughter Erica’s store, and a realtor assistant to her granddaughter Kelli. She is known for her sugar cookies and her collection of over 300 teapots. She was a member of the First Lutheran Church. Her family, especially her children, grandchildren, and great-grandchildren, were the most important part of her life. Surviving relatives include her sons, Edward (Judy) Lewis of Lincoln, NE and Dennis (Michaela) Lewis of Kearney; son-in-laws, Gary Stromberg of Kearney and Bob Happold of Grand Island; Grandchildren, Erica (Blake) Covey, Leah (Andrew) Stade all of Kearney, Lindsay (Jarod) Shearer of Lincoln, Kelli (Scott) Rucker of Kearney, C.J. (Jill) Happold of Lincoln, Darbi (Brady) Roeder of Kearney, Breanne Wilton of Papillion, Abigail (Adam) Sterling of Omaha, and Rob (Brittney) Lewis of Kearney; 21 great-grandchildren. Darlene was preceded in death by her parents; husband, Bud; daughters, Debra Lewis Happold and Darla Lewis Stromberg; sisters, Verda Fairfield and Mardell Schmidt; brother, Darwin Hoffman; great-granddaughter, Harlee Lewis.

The family of Darlene B. Lewis created this Life Tributes page to make it easy to share your memories.

Send flowers to the Lewis family.