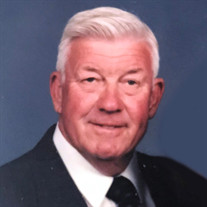 Darold “Red” L. Carman, 87, of Pleasanton, died Thursday, March 7, 2019 at the Brookdale assisted living facility in McCook. Funeral services will be on Saturday, March 9, 2019 at 10:30 a.m. at Grace Lutheran Church in Pleasanton. Pastor Dean Hanson will officiate and burial will be at the Pleasanton Cemetery with military honors provided by the Leo and Clinton Krotz VFW post #9481, the Roy Eaton American Legion Post #321 and the Nebraska National Guard Funeral Honors Team. There will be no visitation. Memorials are suggested to Grace Lutheran Church or the Pleasanton Community Fund. Please visit www.hlmkfuneral.com to leave a tribute or condolence. Services are under the direction of Horner Lieske McBride & Kuhl Funeral and Cremation Services in Kearney. Red was born February 26, 1932, on the family farm near Litchfield, Nebraska. He attended primary school at Pleasant Valley Grade School and later graduated from Pleasanton High School in 1949. He then joined the U.S. Army and served in the Fifth Army in Korea until he received an emergency call home after his father suffered a stroke. He was honorably discharged on January 17, 1953, at Camp Carson, Colorado, a trip that also served as their honeymoon after he married Janet Marlene Eaton on January 4, 1953. To this union two children were born; Lance LaMont Carman and Cynthia Carman Huff. Upon Red’s return from Korea, he and his older brother Ron, took over the responsibilities of running the family farm in the valley northwest of Pleasanton. This was only the beginning of several career adventures that included owning the Pleasanton Market, running the CO-OP fuel truck, Carman Irrigation, owning and managing two area grain elevators, and working for Trotter Fertilizer, while continuing to invest and develop agricultural ground. Red had a deep appreciation of his home state of Nebraska and his lifelong home town of Pleasanton. Serving the area through numerous civic and philanthropic organizations. He recently retired from the Town and Country Bank Board after serving in that position for 45 years. He was awarded an Admiralship in the Nebraska Navy by the Governor of Nebraska in recognition of his years of service to his community and state. He could be found on the banks of the South Loup River catfishing, be it with a cane pole, set lines, or on his airboat. Red, along with his bride, also had a passion for woodworking, creating unique and beautiful pieces for family, friends, and his beloved Grace Lutheran Church. Red is survived by his daughter Cynthia and husband Tom Huff of McCook; sister Carol Lee and husband Charles Johnson of Pleasanton; brother-in-law Darold Eaton and wife Sandra of Grand Island; grandsons, R. Dustin Hedke and wife Betsy of Omaha, Quentin Hedke of Trenton, and Andrew Hedke and wife Michelle of McCook; step-grandchildren Jeff Huff and wife Kim of Lenior City, Tennessee, Lisa Huff of Aurora, Colorado, and Matt Huff and wife Kristi of McCook; great-grandchild Janet Hedke; step great-grandchildren Christian, Natalie, Enzo, Sophia, Corbin, and Quinlynn, many nieces, nephews, and cousins, along with many new friends and devoted friendships that have lasted a lifetime. He was proceeded in death by his lifetime partner and wife of 65 years, Janet, son Lance, brother Ron Carman and wife Grace, parents John and Bertha Carman, father and mother in-law Earl and Sophia Eaton, and nephew Joe Carman.

The family of Darold "Red" L. Carman created this Life Tributes page to make it easy to share your memories.

Send flowers to the Carman family.