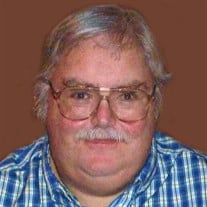 Darrell Erick Epping, age 60, of Funk, passed away unexpectedly Sunday, November 3, 2019, at Kearney County Health Services in Minden. Funeral services will be 11:00 a.m., Thursday, November 7, 2019 at Faith United Methodist Church in Kearney with Pastor Jeff Wulf officiating. Burial will follow at Fridhem Cemetery near Funk, NE. Visitation will be Wednesday, November 6, 2019 from 4:00 p.m. to 6:00 p.m. at Horner Lieske McBride and Kuhl Funeral Home. In lieu of flowers memorials may be given to Faith United Methodist Church, Funk First Responders, the Kearney Animal Shelter, or to the family to be designated later. Please visit www.hlmkfuneral.com to leave a tribute or message of condolence. Horner Lieske McBride and Kuhl Funeral and Cremation Services are in charge of arrangements. Darrell was born on January 17, 1959 to Erick and Beulah (Lawson) Epping. He attended Funk Public School until the 8th grade, then attended Axtell Public School where he graduated in 1977. He went to Grand Island School of Business and then returned to the farm to help his parents. After his dad passed in 1991, he stayed on the farm with his mom, until she passed in 1992. He was an active member of Faith United Methodist Church for 46 years. He served on many church boards. On April 8th, 1995, he married Joan Gustafson. Darrell and Joan loved to travel and took several trips to Kansas City to see the Royals. They also took many trips to the casinos with Nancy and Judy. Darrell was always ready to go somewhere. If you mentioned a trip, he would be packed and sitting in the car or pick-up ready to go before everybody else could turn around. He was the most easy-going man you could meet. He never worried about anything because Joan worried enough for both of them. He also never said a bad word about anyone. Darrell was truly the number one Axtell Super Fan. He was a sports fanatic. He enjoyed every sport, but his greatest loves were watching the Huskers, Kansas City Chiefs and Royals, UNK Lopers, and the Chicago Cubs. He also liked watching NASCAR races in Kansas City and the other races on TV. He favorite racer was #24 Jeff Gordon. Survivors include his wife on 24 and a half years, Joan; sister-in-law Judy Gustafson; special beloved dog, Ruger; lifelong friends Doris and Nancy Murray; and a host of cousins and friends. He was preceded in death by his parents; aunts and uncles; other relatives and friends; and his beloved dogs, Spud and Raider.

The family of Darrell E. Epping created this Life Tributes page to make it easy to share your memories.

Send flowers to the Epping family.