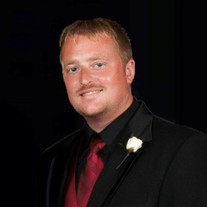 David W. Brooks, age 40 of Hastings, formerly Kearney, passed away unexpectedly on Sunday, May 2, 2021 in Cancun, Mexico. Memorial services will be on Wednesday, May 12, 2021 at 10:30 a.m. at Prince of Peace Catholic Church in Kearney. Father Paul Colling will officiate. Burial will be on Thursday, May 13, 2021 at 12:00 p.m. at the Oxford, NE Cemetery. Memorials are suggested to the family, to be designated later. Please visit www.hlmkfuneral.com to leave a tribute or message of condolence. Horner Lieske McBride & Kuhl Funeral and Cremation Services in Kearney is in charge of arrangements. Dave was born on April 10, 1981 in Grand Island, NE to Toni R. (Monk) and Eugene A. Brooks, Jr. He attended school in Oxford, NE and later would graduate from Southern Valley High School with the class of 1999. After high school, Dave attended the University of Nebraska-Kearney briefly before entering the work force. He was most recently employed as the store manager of Premier Rental in Hastings, NE. Dave always had an adventurous spirit. He grew up in Oxford and he loved the freedoms of a small town. Fishing, golfing, enjoying his house, and driving “Old Blue” made for some of the best times. Dave’s favorite memories were also from times spent with family at Harlan County Reservoir, Table Rock Lake in Missouri, and Dillon, Colorado on vacations. The loss of his father at age 18 was a difficult time in his life. At the age of 21, Dave decided it was time to venture out of Nebraska and he lived in Alamosa, Colorado where he enjoyed being a car salesman. His days off were often spent on the slopes of Wolf Creek mountain snowboarding. He then moved to Albuquerque, NM where he truly enjoyed the New Mexican culture and cuisine, the mountains, and being close to his brother Joe and cousin Jay. In 2005, Dave decided it was time to return to Nebraska to settle down. Dave married Rebecca Bunger on August 1st, 2008. They were blessed with one daughter, Baylea. After this union came to an end, Dave made his home in Hastings, NE where he had many friends. Dave’s hobbies included spending time at the lake, listening to music, snowboarding, wakeboarding, fishing, golfing, cooking, woodworking and Denver Bronco football. He enjoyed cook outs with friends and family and most recently celebrated his 40th birthday surrounded by loved ones. Above all else in his life, Dave’s greatest accomplishment was his daughter, Baylea. She was the light of his life and what he truly lived for daily. When Baylea was born, you could not find a more proud dad in the world. His spirit will live on through her. Surviving relatives include his daughter, Baylea Brooks of Kearney; mother, Toni Brooks of Kearney; siblings, Joseph Brooks and his wife Nancy of Albuquerque, NM, Daniel Brooks and his wife Carly of Kearney and Rebecca Hajek and her husband Josh of Kearney; grandmother, Orvene Brooks of Oxford, NE; nephews Peyton, Preston, and Paxton Hajek; nieces Lanee Brooks and Olivia Brooks; special friend Mariah Shurter of Hastings, NE; numerous aunts, uncles, cousins, other extended family and a host of friends and valued co-workers. Dave was preceded in death by his father, Eugene Brooks, Jr.; sister, Pamela Brooks; maternal grandparents, Wayne and Dolores Monk; paternal grandparents, Eugene Sr. and Mary Brooks; and niece, Lauren Hajek.

David W. Brooks, age 40 of Hastings, formerly Kearney, passed away unexpectedly on Sunday, May 2, 2021 in Cancun, Mexico. Memorial services will be on Wednesday, May 12, 2021 at 10:30 a.m. at Prince of Peace Catholic Church in Kearney. Father... View Obituary & Service Information

The family of David W. Brooks created this Life Tributes page to make it easy to share your memories.

Send flowers to the Brooks family.