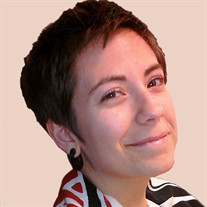 Dawn C. Salyer, 36, of Kearney, NE passed away on Thursday, January 10, 2019 at her home. Funeral services will be on Friday, January 18, 2019 at 10:30 a.m. at Holy Cross Lutheran Church. Pastor Chad Anderson will officiate and burial will be at Kearney Cemetery. There will be no visitation. Memorials are suggested to the family to cover expenses and provide for the children’s education. Please visit www.hlmkfuneral.com to leave a tribute or message of condolence. Horner Lieske McBride & Kuhl Funeral and Cremation Services in Kearney is in charge of arrangements. Dawn was born on August 27, 1982 in Coolidge, AZ to Daniel R. and Debra A. (Maris) Petty. She graduated from McCook High School in 2000, McCook Community College in 2002, and UNK in 2007. She married David E. Salyer on June 1, 2002 in McCook. Dawn and David were blessed with four children: Haven, Peregrine, Evelyn, and Jocelyn. Dawn was a member of Trinity Presbyterian Church in Kearney, where David serves as associate pastor. Dawn was deeply loved by all who knew her. She exemplified true kindness, compassion, and charity to everyone she met. She brought a wild and reckless joy to every situation. In school years her passions were singing, beauty pageants, show choir, sports, speech, and drama. From her earliest days she was also known for her devotion to Christ. She was baptized at McCook Christian Church on August 26, 1990 and later attended McCook Evangelical Free Church where she was active in youth group, children’s ministry, choral programs and worship. It was here that a relationship extending back to kindergarten began to grow into something more. Dawn became close friends with classmate David Salyer through shared church and school activities. That friendship matured into a deeper love after High School and during their days at McCook Community College. David and Dawn were married in the summer of 2002. They moved to Kearney to attend UNK where Dawn majored in Speech and Theater Education and performed in numerous plays. Dawn and David found a loving church family in Trinity Presbyterian Church. They graduated UNK in 2007 and moved to St. Louis, MO where David attended Covenant Theological Seminary. It was in St. Louis that Dawn gave birth to their son Haven (b. 2009). Eventually David was called to return to Trinity as an assistant pastor and in May of 2011 David and Dawn made their home in Kearney once again. Three more children followed: daughters Evelyn (b. 2011), Jocelyn (b. 2014), and son Peregrine (b. 2016). Dawn absolutely flourished as a mother and homemaker. She joyfully and tirelessly devoted herself to the care and nurture of her children, gladly taking on the task of educating them at home. She loved learning along with her children and seeing them grow in the knowledge of Christ. She was passionate about sewing, knitting, crafting, cooking, gardening, and healthy living. She was a devoted churchwoman involved in every aspect of body-life at Trinity. She especially had a heart for serving women, particularly for encouraging new and expecting mothers. Tragically, in August of 2018 Dawn was diagnosed with ALS and the onset was rapid. Over the course of a few months, Dawn was progressively disabled by this cruel disease. She received constant care from David, from her mother, from dear friends and family. Though she bore intense suffering she never wavered in her faith. She trusted in King Jesus and desired that He be glorified by her life. Many can attest that He certainly was. On Thursday, January 10, 2019 Dawn died in the arms of her beloved husband and passed into the arms of her Beloved King, where she awaits the resurrection and the restoration of all things. She leaves behind a legacy of self-giving love and a radiant witness to the glory of Christ Jesus. Surviving relatives include her husband, David of Kearney; children, Haven, Peregrine, Evelyn and Jocelyn Salyer all of Kearney; mother, Debra Petty of McCook, NE; brothers, Douglas (Angel) Petty of Minden, NE and Dustin (Melissa) Petty of Tampa, FL; sister, Julie Marvin of Omaha, NE; many nieces, nephews, numerous other extended family and many beloved friends. Dawn was preceded in death by her father, Daniel Petty.

Dawn C. Salyer, 36, of Kearney, NE passed away on Thursday, January 10, 2019 at her home. Funeral services will be on Friday, January 18, 2019 at 10:30 a.m. at Holy Cross Lutheran Church. Pastor Chad Anderson will officiate and burial will be... View Obituary & Service Information

The family of Dawn C. Salyer created this Life Tributes page to make it easy to share your memories.

Send flowers to the Salyer family.