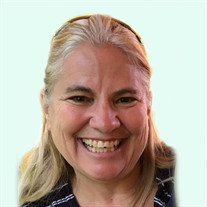 Debra ‘Deb’ A. Petty, age 63, of Kearney, passed away, Thursday, June 3, 2021 at CHI Health Good Samaritan Hospital in Kearney. Memorial services will be on Wednesday, June 9, 2021 at 2:00 p.m. at Trinity Presbyterian Church in Kearney. Pastor Chad Anderson will officiate. There will be no visitation. Memorials are suggested to the family, to be designated later. Horner Lieske McBride & Kuhl Funeral and Cremation Services in Kearney is in charge of arrangements. Debra ‘Deb’ A. Petty, age 63, of Kearney, NE was welcomed into the arms of Jesus, Thursday, June 3, 2021, at CHI Health Good Samaritan Hospital in Kearney. Deb was born on August 6, 1957, in Stratton, NE to Ervin and Sandra (Bush) Maris. She attended school in the McCook area and graduated from McCook High School in 1976. Upon graduation from high school, she moved to Omaha to attend Grace University. During her freshman year of college, while out for a jog, Deb stumbled across the man who would soon steal her heart, Daniel Petty. It didn’t take long before Debra and Daniel decided to commit to spend the rest of their earthly lives together. They were joined in marriage on March 25, 1977, in Omaha, NE. They were married 37 years before Dan’s passing on May 10, 2014. Shortly after their marriage, Dan and Deb began their life’s adventure journeying to Illinois and Ohio before settling in Arizona where they happily made their first home in a reconstructed bus. It was here they were blessed with their first son, Douglas (b. 1978). A few years later, Doug’s world was rocked by the arrival of an incredible little lady, his sister Dawn (b. 1982). Not long after, this little family decided to journey back to Deb’s hometown of McCook and there establish their new home. Within just three short years their family was complete with the arrival of their second son and sweet baby brother, Dustin (b. 1985). It was about this time that Deb began what would prove to be her life’s work. She opened Deb’s Daycare and Preschool where she would spend the next 30+ years loving, serving, and teaching children and their families. The daycare was more than just an occupation for Deb, it was an opportunity for her to be the hands and feet of Jesus. In this Deb would establish lifelong relationships with children and parents alike; relationships where she would continue to minister the grace and love of Jesus for the rest of her days. Deb had many hobbies, including bowling with her sisters, gardening, winemaking, traveling, and spending as much time as possible with her family. Deb’s pride and joy were her children and grandchildren. She loved nothing more than spending time with them and spoiling them. Her grandchildren loved to spend time out on the “farm” doing everything from painting fence, pulling weeds, collecting eggs, feeding horses, and picking cherries, to riding the UTV and collecting rocks, because somehow their grandma could make work fun. Deb loved being active with her kids and grandkids whether it was trips to amusement parks, the ocean, the library, special museums, or just playing volleyball in the yard, she was all about quality time. The foundation on which Deb’s life and adventures was built was her relationship with her Savior, Jesus. She had an infectious love and acceptance for all people, born out of the love and acceptance she experienced daily with her Father. She lived a life poured out to those who’s need was the greatest and didn’t hesitate to give even when her own need was great. The lives she touched are a testament to the life she lived, and the lives forever changed are her legacy. Surviving relatives include her sons, Doug Petty and his wife Angel of Minden, NE and Dustin Petty and his wife Melissa of Tampa, FL; son-in-law, David Salyer of Kearney, NE; step-daughter, Julie Marvin of Omaha, Ne; grandchildren: Lucy Marvin, Felicity (Elisha) Bair, Isaiah, Trinity, Lydia, and Eliana Petty, Haven, Evelyn, Jocelyn, and Peregrine Salyer, and Bailey, Annie, and Katie Petty; mother, Sandra Maris of McCook, NE; sisters: Marie Baker of McCook, NE, Karen (Carl) Riemann of McCook, NE, Shirley (Cliff) Riener of Palisade, NE, Jane (Jim) Foster of Bartley, NE, Mary Maris of Emporia, KS; brothers: Donald (Diane) Maris of Eureka, MO, Roger (Jennifer) Maris of McCook, NE, and Michael (Tanya) Maris of Gering, NE; as well as many other family and friends. Deb was preceded in death by her father, Ervin Maris; husband Daniel Petty; and daughter, Dawn Salyer.

The family of Debra "Deb" A. Petty created this Life Tributes page to make it easy to share your memories.

Send flowers to the Petty family.