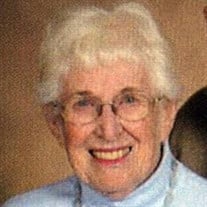 Delphine L. Sanks, 93, of Kearney, passed away Thursday, June 4, 2020, at her home. A memorial service will be 10 a.m. Saturday at the First Presbyterian Church in Kearney. Memorials are suggested to Kearney Area Animal Shelter, Peterson Senior Center, First Presbyterian Church of Kearney, Rowe Sanctuary, and Salvation Army of Kearney. Please visit www.hlmkfuneral.com to leave a tribute or message of condolence. Horner Lieske McBride & Kuhl Funeral and Cremation Services in Kearney are in charge of arrangements. Delphine was born on July 31, 1926, in Broken Bow, NE, to Earl Leonard and Dorothy Delphine (Faragher) Ayers. She spent her first 10 years in Broken Bow before moving with her family to Lexington, NE. She attended Lexington High School and graduated with the class of 1944. Delphine then attended the University of Nebraska on a merit scholarship where she received a bachelor’s degree in English. She later attended Kearney State College where she earned a master’s degree in educational media. Delphine married Lee Sanks on March 24, 1950, in Kansas City, MO. Delphine began her teaching career in 1972 at Kearney Catholic High School, first as a librarian and then as a teacher of junior high English. She held this position for 10 years. She continued her career as a Professor of English at Kearney State College until she retired in 1990. Delphine was an active member in a number of state and community organizations. She was an elder at First Presbyterian Church of Lexington and a member of that church in Kearney and a lifelong member of PEO. She was an active member in the following organizations: Rowe Sanctuary, Nebraska Alumni Association, Girl Scouts and Cub Scouts, Kappa Alpha Theta, Black Masque Chapter of Mortar Board, and Nebraska Educational Television Commission – she was an early advocate of state-wide public radio. She was one of the first female members of the Cornhusker Marching Band. Delphine is survived by her husband, Lee of Kearney; sons, John Sanks of Lincoln, NE, Joe Sanks of Anchorage, AK, James Sanks and Daniel Sanks of Kearney; grandchildren and spouses, Nathan Sanks and Chelsea Faulkner of Brooklyn, NY, and Phillip Sanks of Chicago, IL; and sister-in-law Monna Ayers of Albion, MI. She is preceded in death by her parents, Earl and Dorothy Ayers; and brother, John Ayers.

Delphine L. Sanks, 93, of Kearney, passed away Thursday, June 4, 2020, at her home. A memorial service will be 10 a.m. Saturday at the First Presbyterian Church in Kearney. Memorials are suggested to Kearney Area Animal Shelter, Peterson Senior... View Obituary & Service Information

The family of Delphine L. Sanks created this Life Tributes page to make it easy to share your memories.

Send flowers to the Sanks family.