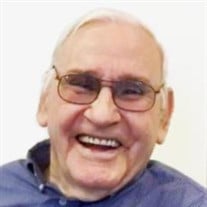 Donald D. Sturgeon, age 87, of Kearney, passed away Saturday, June 27, 2020 at the Central Nebraska Veteran’s Home in Kearney. Visitation will be 5:00 PM to 7:00 PM, Tuesday, June 30, 2020 at Horner Lieske McBride & Kuhl Funeral Home. We will observe the current directed health mandates in place for social gatherings. A graveside memorial service will take place at 11:00 AM, Saturday, July 11th, 2020, at the Sturgeon Cemetery in English, Indiana. Memorials may be made to the Disabled American Veterans. Please visit www.hlmkfuneral.com to leave a tribute or message of condolence. Horner Lieske McBride & Kuhl Funeral and Cremation Services in Kearney is in charge of local arrangements. Donald was born February 5, 1933 to William E. and Stella (McDaniel) Sturgeon in English, Indiana. He served in the United States Army from April 1953 to March of 1955. He married Thelma L. Garringer on May 13, 1961 in Bellevue, NE where they made their home and he owned a concrete construction company. They had three children. They later divorced and he moved to Elm Creek, NE. He was a member of the Veterans of Foreign Wars, American Legion and the Disabled American Veterans. Survivors include the mother of his children, Thelma Sturgeon of Bellevue, NE; two daughters, Donna (Kent) Trampe of Amherst, NE and Stella (James) Harnden of Bellevue, NE; a son, Robert (Donna) Sturgeon of Stockton, MO; his grandchildren and great grandchildren, Kassie Harnden and her daughter Elizabeth Phillips, Kyle Harnden and his daughter Addison, Carly (Colton) Spearman and their daughter Elise, Jared Sturgeon, and Josh Sturgeon; a sister, Edith (Aven) Eastridge of Corydon, Indiana. He was proceeded in death by his parents, four brothers, and five sisters.

The family of Donald D. Sturgeon created this Life Tributes page to make it easy to share your memories.

Send flowers to the Sturgeon family.