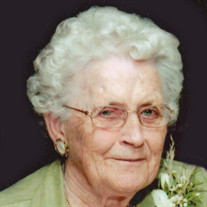 Dorothy J. Stafford, age 100, of Kearney, passed away Friday, November 22, 2019 at Good Samaritan Society- St. John’s in Kearney. Funeral services will be Monday, December 2, 2019 at 10:00 a.m. at First United Methodist Church in Kearney. Rev. Melody Adams will officiate and burial will be at Kearney Cemetery. Visitation is planned Sunday December 1, 2019 from 4:00 – 6:00 p.m. at Horner Lieske McBride & Kuhl Funeral and Cremation Services in Kearney or prior to services Monday at the church. Memorials are suggested to First United Methodist Church or to the family to be designated at a later date. Please visit www.hlmkfuneral.com to leave a tribute or message of condolence. Arrangements are under the direction of Horner Lieske McBride & Kuhl Funeral and Cremation Services in Kearney. Dorothy was the oldest of eleven children of Albert W. and Margaret C. (Anderson) Trimble and was born June 5, 1919 on a farm south of Elm Creek, Phelps County, Nebraska. She attended rural schools in the area before moving to Overton, NE at the age of 13 where she worked for her room and board while attending Overton High School. She graduated with the class of 1937. On April 13, 1941 she was united in marriage to Gilbert W. Stafford at her parents’ home north of Amherst, NE. Three children were born to this union, Karen, Keith and Kerry. Dorothy and Gilbert made their home farming in the Riverdale area. She was a typical farm wife, growing a large garden, canning and preserving fruits and vegetables, and raising chickens for meat and eggs. She loved flowers of all kinds and spent hours working in her yard which was always a showplace. Dorothy was a devoted mother. She taught Sunday School, sponsored MYF, and was a 4-H leader for over 20 years. She served on the Buffalo County 4-H Council, Buffalo County Extension Board, American Red Cross Volunteers, and was a member of Better Home and Gardens Extension club, United Methodist Women and Faithful Rebekah Lodge. Dorothy joined Riverdale Methodist Church in April 1941 transferring to First United Methodist Church in Kearney in 1978. She was a member of the Altar Committee for many years making monthly calls to ensure donations of flowers for the altar at church services. Survivors include son, Keith Stafford and wife Julie of Kearney; daughter Kerry Allen and husband Jim of Riverdale, NE; seven grandchildren, Kirk Swartz of Omaha, Kara Swartz of Omaha, Matthew Stafford of Kearney, Amy Bivona and husband Jon Vandeventer of Kenesaw, NE, Daniel Stafford and wife Crystal of Northville, MI, Blake Bivona and wife Stacy of Kearney, Michael Stafford and wife Mary of Overland Park, KS; seven great grandchildren, Kodi Swartz, Lauryn Kenning, Jamison Stafford, Harrison Stafford, Cash Bivona, Vinny Bivona and Georgia Stafford; sisters, Carol Gearheart of Littleton, CO and Evelyn Bloomer of Phoenix, AZ; brothers, Wayne Trimble and wife Dorothy of Kearney and Bruce Trimble and wife Carol of Kalispell, MT; sister-in-law, Marcia Trimble of Kearney plus many nieces, nephews and friends. Dorothy was preceded in death by her parents; husband Gilbert; daughter, Karen Stafford Swartz; son-in-law, Ken Swartz; four sisters and two brothers.

The family of Dorothy J. Stafford created this Life Tributes page to make it easy to share your memories.

Send flowers to the Stafford family.