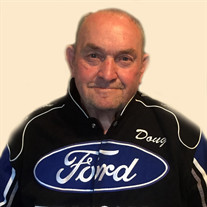 Douglas D. Ramsey, 80, of Kearney, died Thursday, August 2, 2018 at Kearney Regional Medical Center. A celebration of life and luncheon will be held from Noon to 3:00 p.m., Saturday, August 25, 2018 at the Kearney American Legion, 1223 Central Ave., South Entrance. Casual attire is requested by the family. Memorials are suggested to the family. Douglas was born March 9, 1938 in Kathryn, West Virginia to Olice and Eva (McClung) Ramsey. He grew up in Summersville, West Virginia. After high school Doug joined the Air Force and served from 1955 until 1958. Doug married Alice White on December 26, 1957 in Glen Elder, Kansas. After he completed his service they lived in Topeka and Mankato, Kansas until moving to Lexington, NE in 1971. They moved to Minden, NE in 1984 and then Kearney, NE in 1996. Douglas worked as a Maintenance Supervisor at Y.R.T.C. in Kearney. Doug is survived by his son, Dennis Ramsey and fiancé Carma Kluthe of Minden; daughters, June Ramsey of Alpharetta, GA, Janice Schueffele and husband Doug of Kearney, Sherry Ward and husband Tim of Council Bluffs, IA, Joyce Bestol and husband Wayne of Riverdale, NE; 17 grandchildren, and 31 great grandchildren. Doug was preceded in death by his wife Alice in December of 2015, two sisters, and two brothers.

The family of Douglas D Ramsey created this Life Tributes page to make it easy to share your memories.

Send flowers to the Ramsey family.