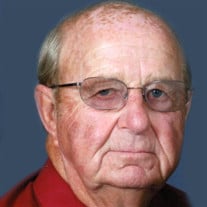 Earl L. “Shorty” Anderson, 84, Pleasanton, died Sunday, February 24, 2019 at Kearney Regional Medical Center. Memorial Mass will be 10:30 a.m., Tuesday, March 5, 2019 at St. Mary’s Catholic Church in Pleasanton with Fr. Richard Piontkowski officiating. Burial with Military Rites provided by the Leo and Clinton Krotz V.F.W. Post #9481, Roy Eaton American Legion Post #321, and the Nebraska National Guard Funeral Honors Team will follow the service at St. Mary’s Catholic Cemetery in Pleasanton. Visitation will be from 5:00 to 6:00 pm, Monday, March 4, 2019 at St. Mary’s Catholic Church with a wake service at 6:00 pm. Memorials are suggested to St. Mary’s Catholic Church or the Pleasanton Volunteer Fire Department. Earl was born February 10, 1935 on the family farm near Litchfield to Raymond and Margaret (O’Neill) Anderson. He graduated from Pleasanton High School in 1952. He joined the Army in October of 1954 and served for two years during the Korean War. Earl married Gwendolyn Kohlscheen on August 23, 1958 in Pleasanton. They farmed southwest of Pleasanton most of their lives. He was a good neighbor to all. Always willing to lend a hand or his equipment. After retiring from farming, Earl worked in the HVAC Department at University of Nebraska at Kearney, Pleasanton Irrigation, and Trotter’s Fertilizer in Pleasanton. Earl was a social person in the community and enjoyed going places, especially Saturday night church in Ravenna and then stopping at the restaurant in Pleasanton for supper. He enjoyed riding and raising Appaloosa horses, working cattle, trail rides, parades, and bowling. He was also involved with the Pleasanton Community Theater, Nebraska Cattleman’s Classic, St. Mary’s Catholic Church, and community events. Earl will be remembered by his love of sharing jokes, stories, and having a good laugh. Earl and Gwen not only spent many hours of the farm working together, but liked taking bus tours and meeting people and making new friends. Earl is survived by his sister, Carol and her husband Robert Supanchick of Hazzard; sisters-in-law, Luetta Anderson of Lincoln, Nebraska, Joan Anderson of Waterloo, New York; several nieces, nephews, and other extended family. Earl was preceded in death by his wife, two brothers, and six sisters.

The family of Earl L. "Shorty" Anderson created this Life Tributes page to make it easy to share your memories.