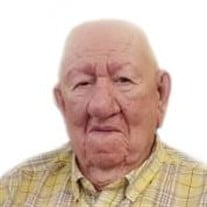 Ed. R. Wilson, 82 of Kearney, died Wednesday, August 7, 2019, at Nebraska Medicine in Omaha. Memorial services will be 10:30 am, August 20, 2019 at Immaculate Conception Catholic Church in Elm Creek with Fr. Alexander Borzych officiating and burial will be at the Kearney Cemetery. Visitation will be from 5:00 to 6:00 pm, August 19, 2019 at Immaculate Conception with a wake service at 6:00. Memorials are suggested to the Elm Creek Volunteer Fire Department. Ed was born October 16, 1936 in Kearney to Kermit and Marie (Broe) Wilson. He grew up in Elm Creek and graduated from Elm Creek High School in 1956. He worked as a farm hand and at the Elm Creek Mill until becoming a road grader operator for Buffalo County in 1963. He worked for the county for 36 years, retiring in 1999. Ed married Lana Sells on May 1, 1971 in Elm Creek. They lived in Elm Creek until moving to Kearney in 2000. Ed was a member of the Elm Creek Fire and Rescue department for many years. He enjoyed playing cards, cribbage, and dancing. Ed is survived by his daughters, Linda Terry and her husband Mike of Shelton, Nebraska, Karen Lucero and husband Doug of Sidney, NE; brother, Jack Wilson and wife Patsy Wilson of Otley, IA; grandchildren, Michaela, Justin, Nathan, Shelby, Josephine, Case, ZanMarie, and Nicholaz Terry, Malachi Washington, Shaylyn, and Krisslyn Lucero. Ed was preceded in death by his wife, one brother and one sister.

The family of Ed R. Wilson created this Life Tributes page to make it easy to share your memories.

Send flowers to the Wilson family.