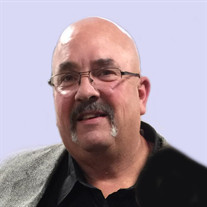 Edward ‘Ed’ K. Hammond, age 60, of Riverdale, passed away Friday, December 27, 2019 at his home due to a tractor accident. Mass of Christian Burial will be on Friday, January 3, 2020 at 10:30 a.m. at St. James Catholic Church in Kearney. Father Art Faesser will officiate and burial will be at Kearney Cemetery. Visitation will be on Thursday, January 2, 2020 from 5:00 p.m. – 7:00 p.m. at Horner Lieske McBride & Kuhl Funeral Home. Memorials are suggested to the family, to be designated later. Please visit www.hlmkfuneral.com to leave a tribute or condolence. Horner Lieske McBride & Kuhl Funeral and Cremation Services in Kearney is in charge of arrangements. Ed was born on February 26, 1959 in Grand Island, NE to Robert and LaRue (Hauck) Hammond. He attended Litchfield High School and graduated in 1977. He married Deborah L. Chromy on June 27, 1987 at St. James Catholic Church in Kearney. Ed worked at Eaton’s in Kearney for over 33 years and later at Trotter’s Fertilizer in Litchfield. Ed will be remembered as an avid outdoorsman, hunter and cattle rancher. He is survived by his wife, Deborah Hammond of Riverdale, NE; son, Benjamin Hammond of Kearney, NE; mother in law, Marie Jean Chromy of Kearney, NE, brothers in law, Daniel Chromy and his wife Shelly of North Platte, NE, Duane Chromy and his wife Debbie of Kearney, NE, Doug Chromy and his wife Anna of Valley Center, KS and David Chromy and his wife Jess of Papillion, NE; nieces, nephews, numerous other extended family and friends. Ed was preceded in death by his parents, Robert and LaRue Hammond; brothers, Steven and James; sister, Trudy Day

The family of Edward K. Hammond created this Life Tributes page to make it easy to share your memories.

Send flowers to the Hammond family.