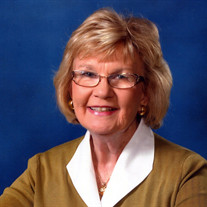 Emily (Seeland) State, 80 of Kearney, died April 5, 2018 at home. Funeral Service will be 10:30 a.m., April 11, 2018 at the First Presbyterian Church with Pastor Eldin Wells officiating, with burial at Kearney Cemetery. A Celebration of Life Service will follow the burial at Kearney Country Club from noon until 2:00 p.m. Visitation will be from 5:00 to 7:00 p.m., April 10, 2018 at Horner Lieske McBride & Kuhl Funeral and Cremation Services. Memorials are suggested to Habitat for Humanity in Kearney, First Presbyterian Church, or M.O.N.A. Emily grew up in Grinnell, Iowa and graduated from Cornell College in Mt. Vernon, Iowa in 1960. Following graduation, Emily married her high school sweetheart, Doug State, and they were happily and lovingly married for 51 years. While they lived in Iowa, Emily taught junior high Spanish and Home Economics for one year. Later, they lived in Denver, CO for five years where Doug started his law career, and then moved to Kearney in 1967. Together they had three daughters: Beth, Laura, and Emmy. Later in life they spent their time together traveling the world to Cabo San Lucas, New Zealand, and throughout Europe. Emily was a woman of great humility and kindness. She was always willing to serve others with a gentle heart and could be found staying up late to finish projects or her world famous cinnamon rolls for the people she loved. She was an avid seamstress with a creative mind. Emily was the example of a hardworking mother who knew how to put her family first and take care of them. Her personality was shown through her sense of style. Emily could never pass up a good sale on shoes and knew exactly what piece of jewelry would go with each outfit. Emily was healthy, vibrant, and full of joy. Even after Doug passed, she made it a point to be active in the lives of her three daughters and their families. She treasured each of her 11 grandchildren and four great grandchildren so individually. She made it a point to attend each important life event of theirs, whether that be school or sporting events, graduations, weddings or the birth of their babies. She knew how to make each one feel special, seen and cherished. Emily always had a full calendar and dedicated any of her free time to volunteering and being involved in her community. She was a member of P.E.O., having served as president. She was actively involved in the MONA Guild, served as a docent and chaired Kaleidoscope. She was a Girl Scout Leader, a volunteer for the American Red Cross and Good Samaritan Hospital in their gift shop. She served on the board of the Friends of the Lied Center and was a loyal Habitat for Humanity volunteer. She loved her Monday night Book Club and her Tuesday morning Bible Study. She loved her church, First United Presbyterian, and served in the choir and as a deacon. She loved her friends, planning and attending many Fishwives trips all around the United States. She never stopped learning and took classes at the Senior College. She golfed with the Kearney Country Club Women’s Golf League and was an active Gamma Phi Beta alumna. During football season, she was at the top of her game competing in her FEMME fantasy football league. The rest of her week would be filled with meeting her friends for lunch or coffee and attending one of her several bridge clubs. Emily was full of life until the very end, enjoying every day spent with people she loved and cared for. Her heart was generous, and she left a positive and lasting impact on the people she met. She was one to speak life to people, letting them know she believed in them, how they were important and what she loved about them. Her life was admired by her children and grandchildren, with constant whispers of “isn’t grandma the greatest!”. Hanging in her home, she has the quote, “Years may wrinkle the skin, but to give up enthusiasm wrinkles the soul.” Emily was one who never lost her zeal for life and took each day as an opportunity to fit as much life into one day as possible. We rest in knowing that she is now at the throne of her Savior, and once again reunited in the arms of her best friend, Doug. As we say goodbye to the lively soul Emily was, we know she is finally home and complete once again with Doug by her side. Survivors include her daughters and spouses Beth and Bob Betthauser of Gardner, KS., Laura and Daniel Reinders of Huron, SD., and Emmy and Jay Johnson of Scottsdale, AZ.; Grandchildren Brian Betthauser and his wife Mindy, of San Antonio, TX., Andrew Betthauser and Philip Betthauser, both of Gardner, KS., Emily Matteson and her husband, Josh, of Overland Park, KS., Hannah Schouten and her husband, Jon, of Huron SD., Carly Reinders and Tory Reinders both of Huron, S.D., Nathan Reinders of Valley Village, CA., Vladik Reinders of Kansas City, MO., Alexa Johnson and Amanda Johnson both of Scottsdale, AZ.; Great-Grandchildren Blakely Betthauser and Brixley Betthauser of San Antonio, TX., Kobe Schouten and Theo Schouten of Huron, SD. She was preceded in death by her husband, and parents.

The family of Emily State created this Life Tributes page to make it easy to share your memories.

Send flowers to the State family.