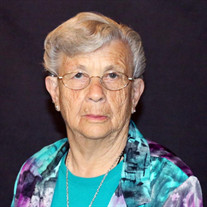 Enid Darline (Dubs) Kicken, 88, formerly of Shelton and Ainsworth, Nebraska, entered into eternal rest on Saturday, October 2, 2021 at Brookstone Gardens in Kearney, Nebraska. Funeral services will be at 4:00 PM on Thursday, October 7, 2021 at the United Methodist Church in Shelton. Visitation will be 1 hour prior to services at the church on Thursday. Burial and graveside services will be at 12:00 PM CST/ 11:00 AM MT on Friday, October 8, 2021 at the Hyannis, Nebraska Cemetery. Please visit www.hlmkfuneral.com to leave a tribute or message of condolence. Horner Lieske McBride & Kuhl Funeral and Cremation Services of Kearney are in charge of arrangements. Enid was born on January 4, 1933 to Hans and Leola (Herzell) Dubs in Hyannis, Nebraska. She grew up on the family homestead south of Ashby, Nebraska and graduated from Ashby High School in 1950. Following graduation, she worked on various ranches before moving to Alliance, Nebraska to work at the Safeway grocery store. There she met Raymond (Ray) K. Kicken and they were married on November 27, 1955 in Alliance. They were blessed with two children, Gary in 1961, and Jeanne in 1976. Ray and Enid managed the Co-op store in Bingham, Nebraska for several years before moving to a ranch on Hagen Lake in southern Brown County in the mid 1960s. They purchased the Fegley place south of Ainsworth where they farmed and ranched until the farm crisis of the 1980s. Enid then returned to work outside of the home and was a housekeeper at the Brown County Hospital for several years and then a janitor at the Ainsworth United Methodist Church. After retirement, Enid and Ray moved to Shelton in 2004, where she had her most favorite job of all, taking care of her grandkids. Enid was a very social person and loved to be on the go. She especially enjoyed going to the various activities that her grandchildren were involved in. Whether it was ball games, dance recitals, or livestock shows, she wanted to be there. She was a past Worthy Matron of the Order of the Eastern Star in Ainsworth, active in the extension clubs in each county that she lived in and was recognized this past summer with her 50 year membership in the American Legion Auxiliary. She enjoyed visiting over coffee with friends, playing cards, reading books about the Amish and collecting community cookbooks. She is survived by son, Gary (Gloria) Kicken of Union, KY; daughter, Jeanne (Jeff) Pope of Ravenna, NE; granddaughters, Kami Kicken (special friend Craig) and Keri Kicken of Austin, TX, Jalyea and Justine Pope of Ravenna, grandson, Johnathon Pope of Ravenna and great-granddaughter Ava Hassenmiller of Austin, TX; sisters-in-law, Carol Dubs of Ashby, Carol Wears of Lincoln, and Dee Kicken of Ainsworth; brothers-in-law, Lucien (Margaret) Kicken of Scottsbluff and John (Shari) Jensen of Arthur; plus numerous cousins, nieces, nephews and their families. Enid was preceded in death by her parents; husband Ray (09/06/2005); half-brother James (Pete) Johansen; sister Hazel Roth; brothers John (Jack) Dubs and Art Dubs; sisters-in-law Beverly Jensen and Dotty Dubs; brothers-in-law Wray Roth, Jim Wears and George Kicken.

The family of Enid D. Kicken created this Life Tributes page to make it easy to share your memories.

Send flowers to the Kicken family.