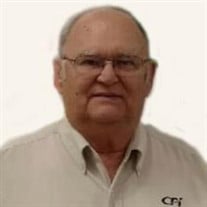 Erwin Cox, 75, of Kearney died Thursday, November 18, 2021 at Good Samaritan Society – St. John’s in Kearney. Funeral services will be on Tuesday, November 23, 2021 at 10:30 a.m. at St. James Catholic Church in Kearney. Father Joe Hannappel will officiate and burial with military honors will be at Kearney Cemetery. Visitation will be Monday, November 22, 2021 6:00 p.m. – 8:00 p.m. at Horner Lieske McBride & Kuhl Funeral and Cremation Services in Kearney. Memorials are suggested the Disabled American Veterans (D.A.V.), or St. James Catholic Church. Erwin Anton Cox was born October 10, 1946 in Ansley, Nebraska to Kenneth and Lucille (Knajdl) Cox. He grew up in Mason City, Nebraska and attended Mason City Public Schools from kindergarten through high school graduation in 1964. He was drafted into the Army in 1965 and served in Vietnam as an Intelligence Analyst. He was awarded a bronze star for meritorious service. He was honorably discharged in 1967. He met Wanda Rasmussen in July of 1968 and they were married November 15, 1969 at St. Gabriel’s church in Hazard, Nebraska. They settled in Kearney, Nebraska and were blessed with three children, Anthony John, Melissa Rae, and Todd Andrew. He worked for West Company and returned to college at Kearney State College graduating with a degree in Business with emphasis in accounting. He was employed by Midland Co-op until retiring in November of 2016. He was a member of American Legion Post 52 and served on the Kearney Legion Baseball Board. He enjoyed sports, especially those that his children and grandchildren participated in. In his youth he played basketball and baseball. He enjoyed hunting, fishing, playing cards and dancing, especially the polka. His is survived by his wife, Wanda, of Kearney; sons, Anthony (Tony) and wife Angie of Lincoln, NE, Todd and wife Melissa of Norman, OK; daughter, Melissa and husband Tom Ruff of Lincoln, NE; grandchildren, Ashlyn, Dylan, and Lauryn Cox of Lincoln, NE, Violet Cox of Norman, OK, Tyler and Molly Ruff of Lincoln, NE; brothers, Kenneth (Sheryl) Cox of Stamford, NE, Michael (Kathe) Cox of Kearney; sisters-in-law, Patricia Bridges of Elkhorn, NE, and Karen Rasmussen of Bloomington, Illinois. He was proceeded in death by his parents, Kenneth and Lucille Cox; parents-in-law Walter and Adeline Rasmussen; brothers-in-law Gary Bridges and David Rasmussen; grandparents Anton and Josie Knajdl and Wesley and Nora Harris.

The family of Erwin A. Cox created this Life Tributes page to make it easy to share your memories.

Send flowers to the Cox family.