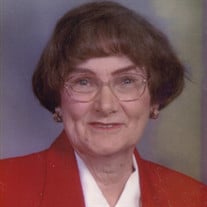 Esther A. Goossen, 80, of Minden, formerly Gibbon and Kearney, died Thursday, November 28, 2019 at Kearney County Health Services in Minden. Memorial services will be on Tuesday, December 3, 2019 at 11:00 a.m. at Faith United Church in Gibbon, NE. Pastor Mike Evans will officiate and burial will be later. Visitation with family will be 1 hour prior to services on Tuesday at the church. Memorials are suggested to the family for designation later. Online condolences may be submitted at www.hlmkfuneral.com. Horner Lieske McBride & Kuhl Funeral Home and Cremation Services is in charge of arrangements. Esther Anne Goossen was born on August 10, 1939 in Boelus, NE to John and Ruth (Rein) Plambeck. She attended Boelus High School and graduated in 1957. On November 24, 1960, Esther was united in marriage to LaRue Goossen in Boelus. Esther enjoyed reading, playing cards and watching football. She was active in the Methodist Women. Esther and LaRue lived in Fremont for 2 years, moved to Grand Island for 1 year and then lived in Kearney for 35 years. After retiring they moved to Gibbon in 1998 and continued to live there until moving to their current home in Minden in 2019. Esther is survived by her husband of 59 years, LaRue Goossen of Minden; children, Shawn Goossen of Northglenn, CO, Shannon (Michael) McCarty of Fountain, CO; grandchildren, Logan and McKenzie Ann McCarty; brother, Donald Plambeck of Grand Island; sister in law, Verna Plambeck of Omaha. Esther was preceded in death by her parents; brother, James Plambeck; sister, Gene and her husband Wesley; sister in law, Mary.

The family of Esther Ann Goossen created this Life Tributes page to make it easy to share your memories.

Esther A. Goossen, 80, of Minden, formerly Gibbon and Kearney,...

Send flowers to the Goossen family.