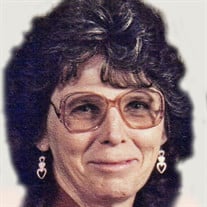 F. Joann Roeder, 75, of Kearney, died Friday, January 18, 2019 at the Good Samaritan Society in Wood River, NE. Funeral services will be Wednesday, January 23, 2019 at 1:30 p.m. at Horner Lieske McBride & Kuhl Funeral and Cremation Services in Kearney. Rev. Jim Wilson will officiate and burial will be at Stanley Cemetery at Amherst. Visitation will be 1 hour prior to services. Memorials are suggested to the family for designation at a later date. Online condolences may be submitted by visiting www.hlmkfuneral.com Horner Lieske McBride & Kuhl Funeral and Cremation Services in Kearney are in charge of arrangements. She was born September 28, 1943 in Kearney to Floyd and Iola (McGinnes) Kersting. She grew up and attended school in Kearney. On December 22, 1961 she married Darrell L. Roeder. The couple lived in Kearney and she worked as a manager and housekeeper at the Midtown Western Inn and the Best Western motels. Joann liked the outdoors with her flowers and gardening. She especially enjoyed spending time with her family. Surviving relatives include her son Rod Roeder and wife Connie of Kearney; daughter, Angie Burns of Kearney; grandchildren, Vincent, Nicholas, Justin, Jessica Burns, Tawnya and Holly Liner; 16 great grandchildren; sisters, Lorreta Luce and husband Wayne of Colorado, Shirley Wood of Kearney, Joyce Snell of Lincoln, NE, Opal Wilson, Oklahoma, Roberta Kersting of Kearney, Karen Stuhthiet and husband Mike of Lincoln, Lois Kersting of Kearney; brothers, Fred Kersting and wife Ruby of Kearney, Biil Kersting and wife Helen, and Roy Kersting of Kearney. She was preceded in death by her husband, grandson, Christopher Liner, 2 brothers and 2 sisters.

The family of F. Joann Roeder created this Life Tributes page to make it easy to share your memories.

Send flowers to the Roeder family.