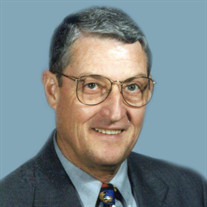 Dr. Frederick G. Harvey, 85, of Lubbock, Texas, formerly of Kearney, passed away Tuesday, November 24, 2020 at the Carillon Care Center in Lubbock, Texas. Funeral services will be 1:00 pm, Wednesday, December 9, 2020 at Horner Lieske McBride & Kuhl Funeral Chapel with Pastor Chad Anderson officiating. Burial will follow at Kearney Cemetery with Military rites provided by U.S. Navy Funeral Honors Team, Kearney American Legion Post #52, and Kearney V.F.W. Post #759. Visitation will be one hour prior to the service at the funeral home. Masks are required to attend the service. Memorials are suggested to the Lubbock Meals on Wheels program, 2304 34th Street, Lubbock, Texas 79411. Frederick was born June 23, 1935 in Kearney to Porter and Alice (Burton) Harvey. He grew up in Kearney and graduated from Kearney High School. Frederick earned his B.A. in Education from Kearney State College, and a Master’s Degree and P.H.D. in Education from the University of Nebraska in Lincoln. Frederick taught in Lebanon, Nebraska and Bertrand, Nebraska until he became Superintendent in Maywood, Nebraska. He later worked for the Nebraska State Department of Education from 1967 until 1969. Frederick moved to Kingsville, Texas in 1969, where he was a Professor of Education until 1993. Then he worked as a Principal at Avery Elementary in Bellevue, Nebraska until retiring in 1997. Frederick joined the Navy in 1954 and served during the Korean War. He was Honorably discharged in 1962. Frederick married Norma Shafer also of Kearney, April 10, 1954 in Phillipsburg, Kansas. They were married for 57 years until she passed away in 2011. Norma is buried at Kearney Cemetery Frederick married Debbie (Hughes) Shelfer June 16, 2012 in Lubbock, Texas. They were two widows who found each other and enjoyed traveling together. Frederick was active in the Texas South Plains Honor Flight in Lubbock. He enjoyed wood working, reading, photography, family research, and people. He volunteered his time to Meals on Wheels in Lubbock. Frederick is survived by his wife, Debbie Harvey of Lubbock, TX; son, Larry and Melinda Harvey of Lubbock, TX; daughter, Terry and Galen Gaither of College Station, TX; grandson, Nathan and Kacee Harvey of Lubbock, TX; great grandchildren, Hannah and Bennett Harvey.

The family of Dr. Frederick G. Harvey created this Life Tributes page to make it easy to share your memories.

Send flowers to the Harvey family.