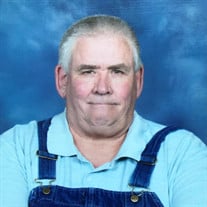 Gary L. Carman, age 69, of Litchfield, passed away Friday, October 1, 2021 at CHI Health Good Samaritan Hospital in Kearney. Mass of Christian Burial will be on Wednesday, October 6, 2021 at 10:30 a.m. at St. Mary’s Catholic Church in Pleasanton. Father Richard Piontkowski will celebrate and burial will be at the Pleasanton Cemetery. Visitation will be on Tuesday, October 5, 2021 from 5:00 p.m. - 7:00 p.m. at Horner Lieske McBride & Kuhl Funeral Home in Kearney. Memorials are suggested to the McKenna’s Rae of Hope Foundation. The son of Lindy and Carol (Fairchild) Carman, he was born on September 3, 1952 in Kearney NE. Gary attended grade school in rural Buffalo County and graduated from Pleasanton High School in 1970. He graduated from Nebraska College of Technical Agriculture in Curtis, Nebraska. He came home to the family farm where he farmed for 30 years. He married Christine Baye and together they raised five boys. In recent years he owned and operated GC Trucking. Gary’s biggest source of pride was his children and grandchildren. His favorite hobbies were fishing and family activities. He was affectionately known by his nieces and nephews as Uncle Gar. Gary could strike up a conversation with anyone, and he will be deeply missed by all who knew and loved him. Gary is survived by sons, Jesse (Abby) Carman of Shelton NE, Jeremy (Vanessa) Carman of Guymon OK, Jimmy Carman of Litchfield, NE and Jacob Carman of O’Neill, NE; four grandchildren, Callee, Lilli, Colton and Colby; sisters Barb (Larry) Lindner of Pleasanton NE, Cindy (Tim) Bittinger of Raymond NE, Pat (Dave) Peck of Osage City KS, and Pam (Jay) Altmaier of Merriman NE, two aunts, an uncle and many nieces, nephews and cousins. The family is comforted in knowing he is reunited with his son John, his loving parents and niece Abby.

The family of Gary L. Carman created this Life Tributes page to make it easy to share your memories.

Send flowers to the Carman family.