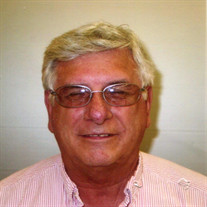 Gary L. Chramosta, 78, of Kearney, died Thursday, April 15, 2021 at CHI Health – Good Samaritan Hospital in Kearney. Celebration of Life Services will be held on Sunday, April 18, 2021 at 1:00 p.m. at the Kearney American Legion Post #52 Bingo Hall, 1223 Central Ave, Kearney, NE. Attendees are asked to use the south entrance. Burial will be later and there will be no visitation. Memorials are suggested to the Kearney Area Animal Shelter, the Kearney Goodfellows or St. James Catholic Church, care of the family. Please visit www.hlmkfuneral.com to leave a tribute or message of condolence. Horner Lieske McBride & Kuhl Funeral and Cremation Services in Kearney are in charge of arrangements. Gary was born on September 18, 1942 in Ravenna, NE to Charles and Gladys (Russell) Chramosta. He attended Ravenna High School and graduated in 1960. After high school, he attended college in Omaha where he earned a bachelor’s degree. Gary would then begin a lengthy 53 year career in the Kearney area as a CPA. He was united in marriage to Linda Luhn on June 4, 1962 in Ravenna, NE. Gary and Linda were blessed with three children; Rick, Vicki and Todd. Gary was a member of St. James Catholic Church in Kearney. Gary is survived by his wife, Linda of Kearney; daughter, Vicki (Chramosta) Lee of Omaha; son, Todd Chramosta and his fiancé Joi Brown both of Overland Park, KS; grandchildren, Tori Lee and fiancé Trey Nicholson of Omaha, Ellie Chramosta, Grace Chramosta and Derrick Chramosta all of Overland Park, KS; sister in law, Virgie Chramosta of Lincoln, NE; numerous other extended family and friends. Gary was preceded in death by his parents; son, Rick Chramosta; brother, Glenn Chramosta

The family of Gary L. Chramosta created this Life Tributes page to make it easy to share your memories.

Send flowers to the Chramosta family.