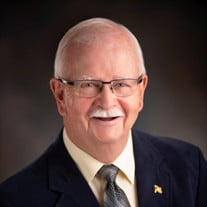 Gary F. Roubicek, 72, passed away June 3, 2021 after a brief stay at Good Samaritan Society St John’s. His long, difficult struggle ended peacefully, with his wife at his side, following a motor vehicle accident Feb 15, 2021. Gary was born, and raised, in Omaha to Charles A. and Mildred (Bengtson) Roubicek August 10, 1948. After graduating from Central High School in 1966 he attended the University of Nebraska at Omaha and transferred his Junior year to the University of Kansas in Lawrence, KS after meeting the love of his life who was enrolled there at the time. In May of 1969, he enlisted in the Navy as he had a low Draft number. He was honorably discharged in February 1970 due to a previously unknown medical condition regarding allergies to wool and marine air. He was stationed in San Diego, CA. He returned to Omaha and married Fiona (Cowan) Roubicek in June of that year. They moved to Denver after the wedding, where their children, Eric and Meredith were born. He worked in quality control for a pneumatics company, sprayed texture on ceilings for a home builder and painted houses before answering a help wanted ad by Burger King Corporation, looking for a restaurant manager. Gary’s dad had told him repeatedly not to go into the restaurant business as that’s what he had done all his life, first with the railroad then in management at the New Tower in Omaha. Having been a busboy for his dad and working at the food stand at Peony Park, food service was certainly not where he aspired to be. He applied for the job, was hired and went to Whopper College, eventually becoming a corporate restaurant manager. He was interested in becoming a franchisee. The family moved to Kearney in 1977 after visiting the city and the franchise restaurant already under construction. That was the south store as Gary called it. Food service was in his blood. The couple went on to open a Burger King in North Platte and on 56th St in Kearney, the north store. They sold the businesses in 1999. Gary was very involved in the community, having served on the boards of directors for the Kearney Area Chamber of Commerce and the Good Samaritan Hospital Foundation including Chairman 2001-2002. He was a member of the Kearney Catholic School Board during which tenure he brought the Great Cotton Mill Duck Race to Kearney as a fundraiser for the school from 1997 to 2007. Kearney High School and UNK Athletic Foundation also became beneficiaries of that event. He received the 2005 Kearney Area Community Foundation Award for Volunteerism and together with his wife in 1996 received the Kearney Hub Freedom Award in Education. Gary was a Life member of the Kearney Optimist Club, serving as a Past President and Lieutenant Governor for the Nebraska Optimist District. He loved the outdoors whether hunting, fishing or camping with his family and friends or following his Brittanies as they flushed pheasants and quail. He planted over a thousand trees and shrubs on our small acreage and really enjoyed mowing the lawn. After his car accident he asked if he would be able to mow this summer. Gary got great pleasure from the CDs he created from his collection of over 300. He was an avid consumer of history and spent a lot of his time at the Great Platte River Road Archway developing and organizing the construction of the Earth Lodge for education and bringing in authentic Native American pow-wows for entertainment. Gary’s library of “one-liners” as he called them was rivaled only by his PCP. He had a knack of customizing jokes to fit the occasion or the audience so they may not know they’ve heard the joke before until the punch line. There were only a couple that never changed, one of those was about the Polish windup toy. Gary is survived by his wife of 50 years, son Eric and Heather (Lamb) Roubicek, daughter Meredith Roubicek, grandchildren Samantha Cromer, Caitlyn Cromer, Cole Cromer, Cierra Roubicek and Zach Roubicek, brother Charles and Mary (Peterson) Roubicek, brother-in-law Al Cowan, sister-in-law Marilyn (Farber) Cowan, sister-in-law Johann (Cowan) and Terry Fortino, 6 nephews, 1 niece and multiple great nieces and nephews. He was preceded in death by his parents, stepmother, several aunts and uncles and cousins. In lieu of flowers, the family suggests memorials be made to Kearney Optimist Club, Kearney Catholic Foundation or Kearney Community Foundation. To leave online condolences please visit www.hlmkfuneral.com. A celebration of life will be held on Gary’s birthday August 10, 2021 at the Great Platte River Road Archway starting at 3:30 p.m. Horner Lieske McBride & Kuhl Funeral and Cremation Services in Kearney is in charge of arrangements.

Gary F. Roubicek, 72, passed away June 3, 2021 after a brief stay at Good Samaritan Society St John&#8217;s. His long, difficult struggle ended peacefully, with his wife at his side, following a motor vehicle accident Feb 15, 2021. Gary was... View Obituary & Service Information

The family of Gary F. Roubicek created this Life Tributes page to make it easy to share your memories.

Send flowers to the Roubicek family.